Although boycotts, divestment and sanctions (BDS) was first introduced at the now notorious Durban Conference in 2001, it took much longer for the ugliness of BDS to clearly manifest itself in the Bay area.  In 2009, a handful of anti - Israel activists from a variety of marginalized groups photographed themselves vandalizing Israeli products at Trader Joes, in an effort to intimidate the independent grocer into discontinuing the items.


The reaction from the community and from all levels at Trader Joes was, shall we say “Fast and Furious”?

A statement from Trader Joes Vice President of Marketing, Jon Basalone, in response to inquiries made it clear that the company would not capitulate to a pressure campaign.

“Our response is that we sell products, and do not use our products as political tools or to make any statements about any political causes. We have no intention of removing any products based on pressure from any group, no matter what they support or don’t support. As always, we believe our customers are smart, and they are capable of making decisions about what they purchase. Let me know if you have any more questions or need more information.” 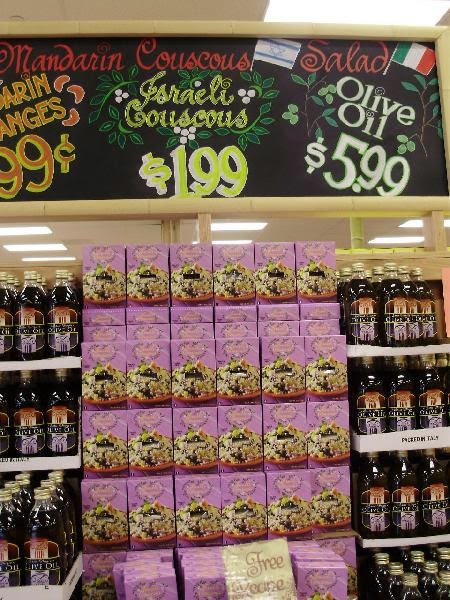 Zionist groups responded to the boycott by giving out free samples of Israeli products outside of Trader Joes, encouraged by store managers that offered them an  “employee discount” on their purchases. A  "buy-cott"  was declared.  The community pulled together, and across the country,  from coast to coast, Trader Joes sold out of all their Israeli products.

The rout was so terrible, so complete, that the BDS holes slunk away, tail between their legs, and never bothered Trader Joes again.

Other limited actions targeting grocers in the Bay area fell flat as well.  Targeting retail establishments  was nearly impossible. If activists kept their actions under cover to prevent an equal and opposite response, they deprived themselves of the self-congratulatory publicity that their movement thrives on.  Organizations  like QUIT and IJAN made a halfhearted attempt to target Safeway, the Berkeley Bowl, Victoria’s Secret.  It went nowhere. Giving up on creating change, the activists focused on creating “youtube moments”, with increasingly ridiculous song and dance routines.  Jump the shark tactics.

By 2010,  the BDS movement had turned to food coops as their next soft target.  With only a minimal expenditure to “buy in”,  the food coop membership could easily be padded with  supporters.  .  Achieving success only at the Washington State Olympic co-op, whose exceedingly  low 5 dollar membership rate (free to seniors, disabled and low income) allowed  it to be easily hijacked by special interests,  the tactic  racked up an impressive amount of failure before it was cast to the wayside. Bay area coops in Davis and Sacramento went to extraordinary measures to keep BDS  off their local, organic and sustainable  plates.

In 2011,  local activists  turned their attentions to the CalPERS and CalSTRS state pension funds. After a year of vigorous lobbying they failed to get even ten percent of the votes needed to get their referendum on the ballot.

Even the passage of  SB160, the divestment resolution at UC Berkeley, touted as a tremendous victory for BDS,  was moderated by language distancing itself from the greater goals of the  "BDS movement", and  (horrors!) contained language recognizing Israel's existence as a state.

Divestment is solely a tactic being used in support of justice and human rights, and should in no way be misconstrued as support for any other goals or beliefs related to the BDS movement and their leaders.


WHEREAS, the BDS movement calls on a cultural and academic boycott, which hurts more people than just policymakers, is counterproductive to academic and cultural growth, and is an inherently different tactic than divesting from companies directly involved with human rights violations
and WHEREAS, newspapers that label this bill as divestment from Israel should be considered misleading as it does not seek to divest from the country as a whole and endorses no such action;
THEREFORE BE IT RESOLVED, that the ASUC should not be construed to support a significant portion of the BDS movement including but not limited to their call for an academic and cultural boycott of Israel and the strong undertones essentially calling for a one-state solution
BE IT FURTHER RESOLVED, that the ASUC President author an open letter to the public explaining that this bill in no way divest from the state of Israel and should not be labeled as “Israeli divestment”.
BE IT FURTHER RESOLVED, that while the ASUC supports specific and targeted divestment from companies contributing to human rights violations, they also support international law stipulating Israel’s right to be a state  with equal rights for all its citizens.

SB 160 was eventually voted "unconstitutional"  with the ASUC Judicial Council  unanimously ruling that the ASUC Senate lacked the authority to divest ASUC funds.

Finally, this year,  the Sonoma board of Supervisors  voted unanimously to extend Veolia's contract to operate bus service for the county. This marked a tremendous defeat for  the North Coast Coalition for Palestine BDS group, that had spent countless hours lobbying to defeat Veolia.

Good to know, thanks for all the good work you do bringing these important stories to light. Shabbat Shalom to all