The hypocrisy is breathtaking, even for Jewish Voice for Peace. Over a year ago, JVP issued a statement regarding the notorious anti-Semite Gilad Atzmon- a man  who once declared  that burning synagogues  was a "rational act".  He has stated " I'm anti-Jewish, not anti-Jews. I think Jewish ideology is driving our planet into a catastrophe and we must stop."   JVP stated rather unequivocally  "we cannot endorse events in which he takes part." .

Jewish Voice for Peace's work for justice in Palestine/Israel is inspired by Jewish tradition, with a focus on principles of human rights, justice, and international law. JVP takes a strong stand against bigotry in any form, whether it be anti-Arab, anti-Muslim, or anti-Jewish. We do not work with anyone who uses oppressive language, imagery or those who attempt to demonize any group of people by ethnicity, religion or race.Gilad Atzmon is currently on tour throughout the US. We view his public political stances as anti-Jewish and counterproductive to the pursuit of justice. Atzmon has an extensive record of demonizing Jews as a people under the guise of Palestine solidarity. For these reasons,we cannot endorse events in which he takes part.We deeply appreciate the statement put out today that re-affirms Palestinian activists' principled stance against anti-Semitism


There must have been a breech of communication, because just last week, JVP-Los Angeles sent out a notice- wait for it- promoting  Gilad Atzmon's May 17th appearance at the Mint 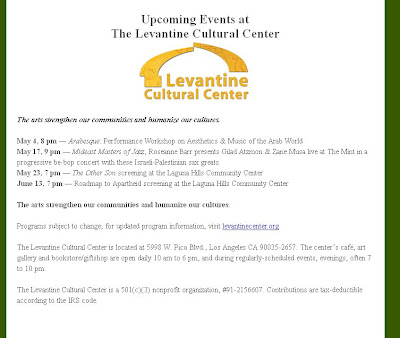 How supremely  ironic to promote a man who promotes Holocaust deniers and conspiracy theorists under the tagline "The arts strengthen our communities and humanize our cultures" .

Was this email from Estee Chandler a violation of JVP policy, or was it  typical JVP hypocrisy-  using a facade of human rights-speak to mask an ugly core of  demonization against those who support the rights of the Jewish people to self determination in their ancient homeland?   Considering that Estee promotes events hosted by the Shura Council and  Al Awda on the same email, the answer is obvious.   Jewish Voice for peace's  public statements stand in direct opposition with their statements on their closed distributions lists. Jewish Voice for Peace refusal to press access to their annual Conference in Berkeley- their rejection of comments on their website devoted to "tracking efforts to stiffle open debate" highlight the hypocrisy at the core of JVP.  JVP's track record of supporting and enabling those who call for the destruction of the state of Israel reveals their sole function -that  of providing a fig-leaf for terror supporters.