What do you do when the truth doesn't serve your narrow political agenda?   American Muslims for Palestine chooses to ignore it.    In an effort to stem the backlash against their defamatory "apartheid"  ads, AMP  has urged its constituency to call the City's Board of Supervisors, claiming that “free speech” is under attack by the JCRC, a "pro occupation" organization

Pro occupation?  Since at least 2007, the JCRC has had this consensus statement on its website: 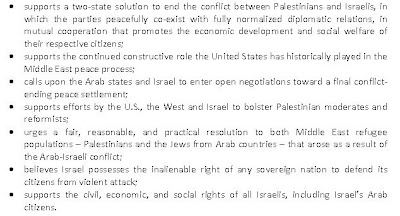 Endorsing a two state solution with equal rights for all puts JCRC squarely in the camp of the moderates, as opposed to AMP or JVP, who will not endorse the only solution that grants self determination to both the Jewish people and the Palestinian people.

The JCRC has issued a press release referencing a letter signed by seven SF supervisors that
A) Condemns AMP
B) Asks the San Francisco Municipal Transportation Authority (Muni) to ban political speech ads
C) Asks Muni to donate the proceeds from AMP”s ad to a fund to serve the Jewish community. (To counter the hurtful effect of Geller’s hate-speech ad, Muni donated the proceeds from it to fund a study of the health impact of Islamophobia on Arabs and Muslims in the Bay area.)

Here’s the letter:   It does none of these things.  It does not condemn AMP, only the inappropriate ads, characterizing them as "hurtful" and "alienating".   It does not ask for a ban on political speech, but rather an exploration of  "a creative solution' to this "growing war of words".  It asks that the proceeds of the ad go to the Human Rights Commission. 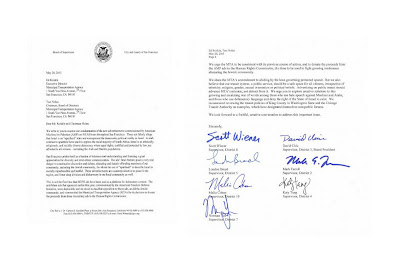 With its use of the term  "apartheid", and with the incendiary and inexact language  it uses to spur its constituency to action, the American Muslims for Palestine show again that are living in a truth optional world, continuing to propagate misinformation in order to promote their extremist agenda.
Fortunately seven of our City Supervisors were able see through this.
Posted by Dusty at 11:43 AM