Why I do not support the Gaza Flotilla 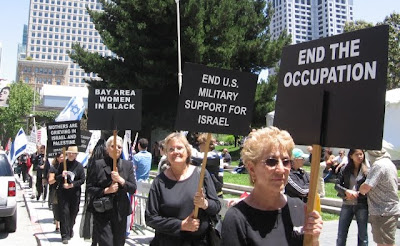 
Santa Cruz, Ca. -- On July 4th, I joined a small group of anti-war activists at a busy intersection with signs, flags, and banners. Sherry Conable, Louis Lafortune, and Steve Pleich were there. There were WILPF'ers. There were Raging Grannies. And there were the

Women In Black. As someone who dedicated my life to world peace at age 14, normally I would be donning black garb, wearing a hat with a black veil, and standing somberly with the WIB against those who would turn our children into cannon fodder, but I'm not. For WIB has been imbued with what can only be called anti-semitism and a rabid hatred of Israel.

And on that street corner, several Santa Cruz area residents showed up with signs supporting the Gaza Flotilla, currently chained in a Greek harbor under "house" arrest. I do not support the Flotilla. 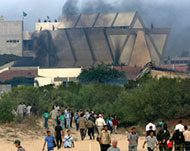 Photo: As Israel withdrew from Gaza in September of 2005, mobs of Palestinians set fire to the 24 synagogues that the Jewish residents had declined to raze.

look at those islamonazis going after that temple like a pack of hungry wolves.

Thanks for being out there, and for sharing some real history with those who can hear it!