Because you can't tell the Players without a Scorecard

Excellent chart showing the relationship between the Muslim Brotherhood, Hamas and the Flotilla organizers from the Big Peace website. Thanks to Elder of Ziyon for pointing this out 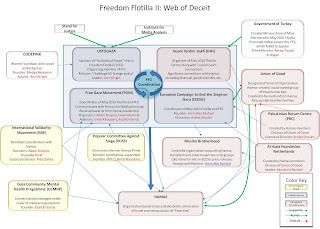 From Big Peace regarding the European Campaign to End the Siege on Gaza, one of the primary organizers of the flotilla:

So who is the ECESG?
Simply put, ECESG is an anti-Israel, pro-Hamas umbrella organization that organized the Freedom Flotilla 2, supported the Mavi Marmara flotilla, and is involved in other projects to further delegitimize and isolate Israel.

The ECESG founder, Amin Abu Rashed (aka Amin Abu Ibrahim) is one of the key organizers of Freedom Flotilla 2. A daily Dutch newspaper, De Telegraaf, recently named Rashed as the “brain behind the flotilla” and main backer. He is a Palestinian born in Lebanon who holds a Dutch passport and subscribes to the radical ideology of the Muslim Brotherhood. Rashed’s past affiliations include the Dutch branch of the Al-Aqsa Foundation, and the Union of Good. Israel outlawed Al-Aqsa in 1997, and declared it a terrorist organization in 1998. The US followed and designated Al-Aqsa as a terrorist group in May of 2003, and then designated the Union of Good in 2008.

Rashed’s resume gets even more pockmarked as he was implicated in the prosecution of the Holy Land Foundation, which the US Treasury cited as a Specially Designated National and the European Union (EU) banned it for its financial material support to Hamas. For those keeping score, this adds up to Rashed having connections to three organizations that exist to support Hamas’s terrorist agenda.

It was never about aid. At its core, the flotilla and its cousin the flytilla are about challenging Israel's sovereignty.

"Let’s be clear: Free Gaza activists are not peace activists. Through their actions they seek to intensify the conflict, not defuse it. These are warmongers..."

"What the Flotilla/Flytilla organizers hope for is Israel’s destruction. Some otherwise goodhearted, well-intentioned people (including such notables as flotilla passenger Alice Walker) have been fooled by the Flotilla/Flytilla organizers’ rhetoric of “peace and justice.” But, we dare not be lulled into thinking these ongoing efforts are passing phenomena of no significance, a mere midsummer’s distraction. These people are serious, determined and they are working with our regional enemies toward our eradication. To believe otherwise is to engage in self-delusion."
Posted by Dusty at 9:23 AM