More Photos from the hell that is Gaza 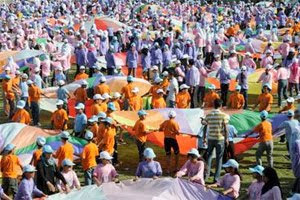 Gaza’s children entered the Guinness Book of World Records for the third year straight today, as they broke the record for the world’s biggest parachute game.

"Schoolchildren from across the Gaza Strip gathered at Khan Younis stadium late this afternoon for the first of four world records they will attempt to break in Gaza this summer.

The attempt, comprising 3,520 children playing with 176 parachutes, more than doubled the record set by pupils at Plymstock School in Plymouth, England on 4 April 2006, when 1,547 children played with 58 parachutes.

International witnesses were on hand to count, including two judges in charge of signing the official statement on behalf of Guinness."

Yes. There is a stadium in the worlds largest concentration camp. Yes, the well nourished happy children were playing games. And yes, the Guinness Book of World records folks somehow found their way to Gaza without the use of a provocative, illegal flotilla

Well, this is very nice. Exceedingly weird, as most of these Guinness things are, but very nice.

I approve of little children playing with toy parachutes, rather than Kalashnikovs.

Meanwhile, Alice Walker writes: "Though the children of Gaza are dangerously malnourished (those who haven’t died) because of the years long siege and blockade, we were not allowed to send much sustenance to them, including items such as milk or juices, “because” we were told “they are liquid.”"