Its about denying the Jewish people the right to Self determination.

This guy gets it. What do the flotilla , the flytilla and the border marches have in common? They challenge Israel's right to enforce its borders- part of the sovereignty of any state. By doing so, these action deny the Jewish people the right to self determination.

"As the flotilla flops in the Mediterranean, the flytilla gets underway. All this, hot on the heels of the border protests in May and June. A specific theme unites these new routes of anti-Israel hatred. The basic fact of national self-determination is to have borders and security, and the common theme of these protests is a desire to breach this security. This shows what the underlying motivation is: anger at the fact that, in Israel, the Jewish people have self-determination.

Flotilla and flytilla indeed – they’d probably try and send in Godzilla if they could. Anything for a bit of attention. For most of these participants these ‘protests’ are vacuous gimmicks: bored, bigoted people yet again forcing Israel to be the moral adult, by visiting their childish whims on its hardworking security staff.

In taking-up these new tactics, the Israel-haters reveal more about themselves than they might have intended.

The very nature of these provocations show that those taking part in them do not believe their own hype. They can claim that Israeli policemen and soldiers are brutal monsters all they like, if they believed it they would not dare provoke them this way. So actually, in flocking to ‘protest’ this way they are paying a back-handed compliment to the morality and restraint of the IDF, police and other Israeli security staff.

Well, at least someone benefits from the venture; trying to breach Israel’s security does nothing to assist the Palestinian people. There are people who genuinely care about the Palestinians and work honestly to help them. Last month, the Miles Of Smiles aid convoy quietly and legally delivered genuine aid to the Gaza Strip. In its sincerity and modesty, this convoy constituted quite a contrast to the flotilla, and other related stunts.

In a way, gimmicks like the flytilla and flotilla sadden me. It is upsetting that the agencies that work so hard protect Israel against so many threats should be forced to spend time dealing with stupid stunts. I also feel for any passengers who are making a genuine trip through Ben Gurion Airport this weekend.

But given what the fundamental motivation of these protests are, they are also a happy reminder of the self-determination Israel brings the Jewish people. Let these fools turn-up with their chests puffed-up and their cameras in their hands. What they really oppose will never go away. Jewish self-determination will outlive every one of them. Am Yisrael Chai."

Anti-Israel activist Paul Larudee, in introducing the concept of the flotilla to a local audience never even tried to maintain the fiction that this was about delivering aid. 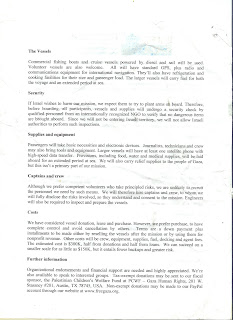 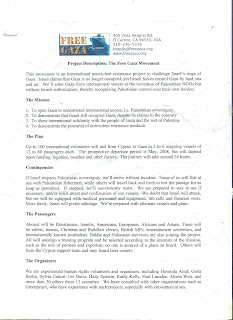 Confusion between the words "Philistine" an ancient but long vanished invading Hellenic Sea People, "Palestinian", a modern Arab political idenitity assigned by the Arab League to Arabs that had left pre-state Israel, and"Palestra", the Ancient Greek word for "a public place for athletics or wrestling", a rough translation of "Israel" or "wrestling with G-d." People are often similarly confused as to why the phrase "Anti-Semite" doesn't apply to all speakers of all Semitic languages. Word meanings, often clarified by word origins, are specific. Today's self-identified "Palestinians", for strictly political purposes, has made a practice of abusing the meanings of words in order to create an emotional response. They have well paid folks with Ph.Ds dreaming these propaganda stunts up. Let's not be naive here, eh?