Lesson from the Audacity of Dopes: Can't get your way? Lie!

At a press conference earlier, the "Audacity of Dopes" announced it would be leaving Greece later this week. Turns out they were lying through their teeth, and they attempted to make a run for it just minutes ago.

Shortly after leaving port, the Greek coast guard stopped the ship. "We are just here, two miles off Piraeus. We've been stopped by the coastguard, their ship maneuvered in front of us and they are now talking to the captain, they want us to turn around," Ann Wright, told Reuters. 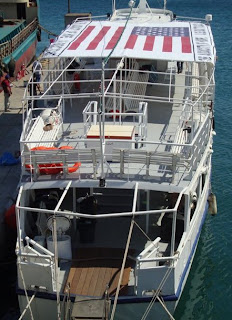 The Greek Ministry of Citizen Protection issued a statement saying that the Minister, C. Papoutsis, decided to prohibit the departure of ships flying either Greek or foreign flags "to the maritime area" of Gaza.

Update:
A second Greek Coast Guard boat with more heavily armed forces arrived and the Audicity of Dopes made the decision was made to return to shore.

Challah Hu Akbar is doing a wonderful job of live blogging the incident.

The latest in a series of publicity stunts and provocations directed against the worlds only Jewish state is scheduled for the week of July 8- the flotilla is clearly anxious to arrive in time to participate, and is willing to disregard international law to accomplish their goal.

As for Israel? They've shown their commitment to using diplomacy and non-violent means to accomplish their goals. Good for them.

How can you help end this provocation? Send the Greek embassies an email or call the Greek Embassy in Washington, DC: 202-939-1300. Thank them for promoting peace by observing international maritime law.
Posted by Dusty at 10:07 AM

Email ThisBlogThis!Share to TwitterShare to FacebookShare to Pinterest
Labels: 2011 Gaza Flotilla, Greece, The Audacity of Dopes

Thank them for promoting peace by observing international maritime law.