War is Peace. Freedom is slavery. 1984 comes to the First Presybterian Church of Oakland

Nothing like generating some controversy to boost sagging ticket sales. In spite of saturating the web with their announcements, the organizers of "Never Again for anyone" just have not been able to generate enough sales to fill their venue, the First Presbyterian Church of Oakland. Could Oakland have had enough of their lies and distortions? That remains to be seen.
Already the venue is under criticism for misleading ticketing practices. Rev. Jack Shiver describes the event in his church bulletin "Temple Tidings" as "free" . The church website also claimed "No one will be turned away" up until today, when that vanished. Thats ok, folks. We took a screen shot. 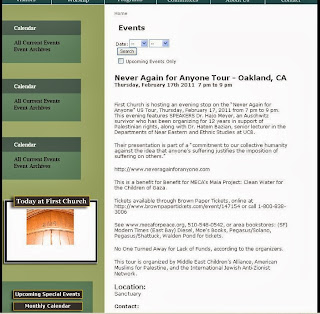 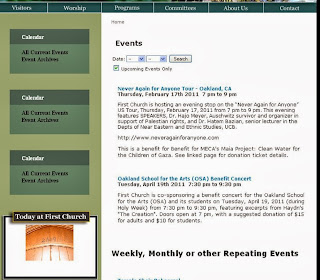 ( OAKLAND 02/16/2011) – Stand With Us and other Zionist groups are pushing for protests tomorrow at the First Presbyterian Church of Oakland in an effort to shut down events planned by the Never Again for Anyone national tour. The tour features Auschwitz survivor Dr. Hajo Meyer and Dr. Hatem, chairman of the American Muslims for Palestine and a professor of Near Eastern and Ethnic Studies at the University of California , Berkeley .

Reverend Jack Shriver has received pressure from the local Board of Rabbis, the ADL, Stand With Us and other Zionist groups urging him to cancel the event. Similar pressure has been applied to the SALAM Center in Sacramento and the Jewish Winchevsky Center in Toronto .

In Sacramento the Board of Rabbis, under the leadership of Rabbi Reuven H. Taff, has issued a thinly veiled threat to disrupt future interfaith work Imam Mohamed Abdul Azeez may undertake if he continues with plans to allow the SALAM Center to be used as a venue for the tour. In Toronto , Zionist groups have threatened to break all ties with and are attempting to threaten the funding of the Jewish community center.

Never Again for Anyone...blah blah blah, blah blah balh (you didn't expect me to repeat their crap, did you?)....

* Attend one or both events.
* It is imperative that those who embrace collective humanity and support human rights for all – and who also support the rights of free speech and free assembly – attend these events to send a clear message that we will not be intimidated by Zionist efforts to smear us with the ‘anti-Semitic’ label.
* Send email of support and appreciation to Reverend Jack Shriver at shriverjack@netscape.net .


What Zionist attack? Could they be referring to this action alert? The one that explicitly says "It is very important that those who join us refrain from engaging in confrontations with extremists from this event."

Apparently yes. If supporters of Israel use the tools of the activists' trade- leafletting, vigils, protests they are condemned, in much the same manner that Israel herself is attacked simply by defending herself.

What can you do? Try and contact the church. Go ahead. But judging by his promotion of the racist Sabeel organization in his church bulletin, Rev. Shriver may already be too far gone.

More importantly, show up tomorrow. rain or shine. The only thing necessary for evil to triumph is for good people to do nothing.
Posted by Dusty at 7:03 PM

i just called all the book stores selling tickets for this filthy event to express my displeasure and to inform them they will no longer receive my business. and of course i added i would be encouraging others to do the same.

Filing in the censored part of the email : "Dr. Meyer brings a message that Zionism is in direct contradiction to the humanitarian Jewish ethics of his youth. "

What absolute sh*t. Zionism is the belief that the Jewish people have the right to self determination in their ancient homeland, and this belief has its orgin in precisely in Jewish ethics.

In Sacramento, at the scantily attented "Never again for anyone" event, Hajo Meyer claimed that Zionism was a "Pseudo Religion" created to support systematic brainwashing of Israelis. (Yeah. He was that nuts)

Clearly he hadn't been reading the pslamists, who wrote this very Zionist statement, thousands of years ago:

"By the rivers of Bablyon, we sat and wept.
Sing us a song of Zion, our captors taunted us.
But how can we sing of Zion in a strange land?
If I forget ye, oh Jerusalem.
Let my right hand wither.
Let muy tongue cling to the roof of my mouth.
If I do not remember Zion even in my happiest time"

Hajo Meyer is a waste of carbon. At the Sac talk, he claimed "Zionism is not compatible with the ethics of the Reform Judaism". Well, Mr. Meyer, perhaps its time to introduce you to Arza, part of the Reform movement http://www.arza.org/aboutus/mission/ whose mission clearly states

ARZA strengthens and enriches the Jewish identity of Reform Jews in the United States by ensuring that a connection with Eretz Yisrael is a fundamental part of that identity.
ARZA develops support for and strengthens the Reform movement in Israel and promotes advocacy for a Jewish, pluralistic, just and democratic society in the State of Israel.
ARZA links the people and institutions of the Reform Movements in Israel and the United States, informed by a love of Israel and a belief in K’lal Yisrael – Jewish peoplehood.
ARZA works in partnership with the Union for Reform Judaism (URJ) and the Israel Movement for Progressive Judaism (IMPJ), and their affiliates. ARZA represents United States Reform Jews in national and international Zionist organizations.

Quick note from the scene, tonight in Oakland. Maybe a hundred or so haters sprinkled around a venue that fits 500. And teams of uniformed security guards patrolling everywhere, no doubt looking for people with horns. Tons of Israel supporters outside. Rev. Jack even came out to harass the pro Israel group. They just aren't making men of the cloth like they used to. It was every bit as bad as you'd expect. What a waste to fill such a lovely building with such hate.

that was a great demonstration tonight at that stinking church. there were way more people then i expected to show up. a special thanks to SFV4Israel and to the people who came all the way out from Vallejo and Fairfield.