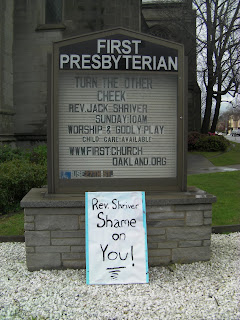 WHAT-- Protest Debasement of the Holocaust to Defame and Delegitimize Israel
WHERE-- First Presbyterian Church, 2619 Broadway (at 27th), Oakland
WHEN-- Thursday Feb 17, 6 PM-7:30 PM

This Thursday, the First Presbyterian Church in Oakland is hosting an event of the nationwide tour called "Never Again for Anyone". It features Hajo Meyer, an elderly anti-Zionist Holocaust survivor, who carries the endorsement of ex-KKK leader David Duke, and Hatem Bazian, a UC Berkeley faculty member with a lengthy resume of anti-Israel activities. It is sponsored by 3 extremist anti-Israel groups: MECA (the so-called "Middle East Children's Alliance" that has never spoken out about the murder of Israeli children by Palestinian terrorists), the American Muslims for Palestine (Bazian's group), and the International Jewish Anti-Zionist Network.

Last month, this event was held at Rutgers University in New Jersey, where event organizers suddenly instituted an admission fee (in violation of university policy) to discourage Jewish pro-Israel students from entering the event.

StandWithUs also reported on this event when it was held February 4 at DePaul University in Chicago . Here are some excerpts from that report:

"The organizers created an intimidating atmosphere. One attendee likened it to a Ku Klux Klan rally. No audience members were allowed to record, film, or photograph the speakers. Members of Students for Justice in Palestine (SJP), which sponsored the event, patrolled the aisles looking for “contraband” recording devices. This created a tense atmosphere, which one audience member described as fascist."

"The speakers vilified current peace efforts and praised the terrorist group Hamas. They repeatedly attacked the moderate Palestinian Authority for “collaborating” with Israel by engaging in peace talks and extolled Hamas as “the democratically elected representatives of the Palestinian people." They attacked Israel’s peace treaties with Egypt and Jordan, with Bazian claiming that the treaties were simply an Israeli plot to “extend its strategic borders all the way up to Iraq.”"

"Hajo Meyer made the Nazi-Israeli equation more explicit. Exploiting his status as a Holocaust survivor, he compared IDF soldiers to Auschwitz guards. He denigrated Jews and Judaism. “The Jewish people are not a civilization,” he charged. The only religion that pro-Israel Jews share is the Holocaust religion. . . . They cannot claim they are Jewish, so therefore they had to invent the Holocaust religion, that is, with its high priest Elie Wiesel,” he said."

(perhaps this is why they are afraid of recording devices inside-- they don't want to let the world know about the hate speech being offered inside).


This is what is coming to Oakland. And not only does the First Presbyterian Church know the content of the program, acting Rev. Jack Shriver is endorsing it.

StandWithUs/San Francisco Voice for Israel will be holding a vigil in front of the church from 6 PM to 7:30 PM on Thursday. We stand against the debasement of the Holocaust and the distortion of history. We stand against the delegitimization of Israel and the endorsement of radical Islamist terror. We stand for the Jewish people's right, along with all other peoples of the world, to national self-determination in our own land. We stand in front of a church that professes to support peace and say "SHAME ON YOU" for hosting this travesty.

We will have Israeli flags and appropriate signs expressing Israel's desire for peace, highlighting Hamas as the impediment to peace, and showing how the situation in Gaza does not at all resemble the Holocaust.

Those who wish to go inside should note that the church's announcement about the event states "No One Turned Away for Lack of Funds according to the organizers." We suggest that you print this announcement up and bring it with you, though we doubt that they will honor their own words. We've taken a screen shot, in case they pull a last minute bait and switch.

It is very important that those who join us refrain from engaging in confrontations with extremists from this event. Remember that we won't change the minds of those who are openly lying to the public. And we will not stoop to their level of hatred by holding signs that disparage Palestinians, Arabs, or Muslims (or any other ethnicity) as an entire group.
Posted by Dusty at 6:56 AM

ya know i'm kinda think maybe we should skip the vigil and just have the U.S. Air Force take the place out with all those degenerates inside.

with or with out the airstrike count me in for Thursday night.

No. No Airstrike.
First Presbyterian Church of Oakland was built in the style of a neo-Gothic cathedral. The building was designed by William Charles Hays and features a copper-clad spire rising 138 feet. The building is made of reinforced concrete designed to resemble cut stone.
Its a shame they are filling this lovely structure with hate. In archecture, and with humanity, its whats in side that counts

I can not believe they changed $15 to go in. The lead speaker was almost unintelligible. They should have used subtitles

Have the AIr Force take out the place. That would be a great idea and we will not have to listen to that noise polution of anti semitic garbage anymore. 4,000 years of history yet israel are the invaders how foolish.

San Francisco has become a hot bed of anti semitism. We need to hit them with some future rallies.