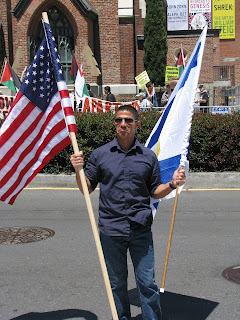 Many people in the Bay area have fond memories of Ishmael Khaldi, an Israeli Bedouin who rose through the ranks of Israel's foreign service to become the vice consul general of Israel in San Francisco. We remember his courageous outreach to Muslim students at UC Berkeley. We remember his article in the San Francisco Chronicle where he exhorted the organizers of Israel Apartheid Week,

"You are part of the problem, not part of the solution: If you are really idealistic and committed to a better world, stop with the false rhetoric. We need moderate people to come together in good faith to help find the path to relieve the human suffering on both sides of the Israel-Palestinian conflict. Vilification and false labeling is a blind alley that is unjust and takes us nowhere."
Ishmael has been touring campuses in recent months and reports "The situation I encountered on many of the campuses in North America and Canada was horrifying.", describing a shocking climate of intolerance and hatred on American and Canadian campuses.

The situation deteriorated further when Khaldi came to Edinburgh University . Described as a scene “reminiscent of tyrants silencing their opposition,” security officers had to be brought in to contain the situation and the event was eventually canceled.

“This isn’t free speech; it is hatred, it is vandalism,” Khaldi told The Jerusalem Post . “These activists abuse the values of freedom and democracy of the UK, they put the seeds of hatred in Europe and they betray the cause of moderate Palestinians who, despite everything, are ready to do everything to reach reconciliation and peace with Israel, toward establishing an independent Palestinian state.”

And once again, the "Proud to be ashamed to be Jewish crowd" Jewish Voice for Peace (JVP), who claim to "track efforts to stifle open debate about US-Israeli foreign policy" on their blog "Muzzlewatch", were totally silent. But why would we expect any different? The stiffling of free speech and open debate that they disagree with is one of their organizational tactics.

Khaldi, one of 11 children, began life as shepherd. He went on to serve in the Israeli border police, and earned a master's degree in political science from Tel Aviv University. His is a voice worth listening to, when he reminds the disruptors and demonizers

"You are betraying the moderate Muslims and Jews who are working to achieve peace: Your radicalism is undermining the forces for peace in Israel and in the Palestinian territories. We are working hard to move toward a peace agreement that recognizes the legitimate rights of both Israel and the Palestinian people, and you are tearing down by falsely vilifying one side."
Posted by Dusty at 6:40 AM