Lt. Governor of California candidate Gayle McLaughlin and the mainstreaming of anti-semitic rhetoric

Gayle McLaughlin is running for Lt. Governor of California. Her Facebook page, her blog and her Twitter account are filled with unwarranted accusations, defamation, lies and anti-Semitic imagery regarding the riots in Gaza. 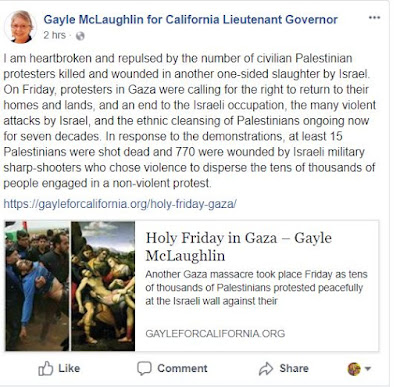 In her blog, Gayle writes

Another Gaza massacre took place Friday as tens of thousands of Palestinians protested peacefully at the Israeli wall against their collective incarceration in Gaza, which can only be called the largest concentration camp in the world.

Of the 30,000 attending the event, there were 17 fatalities- .06 % of those participating.  Of those killed, at least 10 were identified as Hamas terrorists. 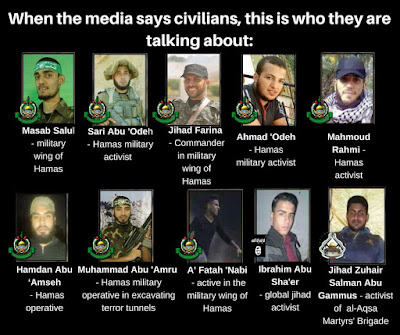 The protest was hardly peaceful, characterized instead by firebombs, burning tires,  thrown rocks, and this: 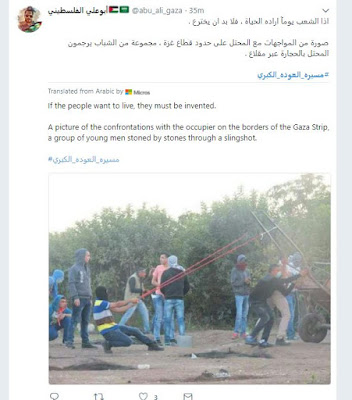 And Gayle, Gaza as "open air concentration camp" is so last decade. Social media is filled with photos of the resorts, restaurants and gourmet shops of Gaza.

My heart is broken by the violent meanness of spirit of Israel. As an American I feel shame for the cover and support our country gives to such crimes. As an activist and a dreamer for a better nation I send my sorrow and my solidarity to the People of Gaza, and I add my voice for a transparent and independent investigation of this massacre.

Your misplaced sympathies for a group vowed to the genocide not only of Israel, but of the Jewish people worldwide reminds me again why so many of my friends left the Green party.

i'm having one of these mailed to Mclaughable's home https://proisraelctu.blogspot.com/2018/04/thousands-of-garden-gnome-statues.html