According to a press release issued Tuesday morning by the Israeli Prime Minister's Office, the northern branch of the Islamic Movement has been declared "an illegal organization."


From the J Post
"The practical significance of this decision is that any entity or individual belonging to the group from hereon out and any individual who grants this organization services or operates under its auspices will have violated a criminal statute and is subject to imprisonment," the government statement read...

"For years, the Islamic Movement's northern branch has been waging a campaign of deceitful incitement under the banner of 'al-Aksa is in danger,' which blames Israel by falsely accusing it of intending to harm the al-Aksa mosque and to violate the status quo there," the government statement read."

"As part of these efforts, the northern branch formed groups of activists (Murabitun and Murabatat) whose job was to ignite provocations on Temple Mount," the government said. "These activities led to a significant rise in tensions on Temple Mount. A significant portion of the attacks that have been carried out recently were committed against the backdrop of this incitement and propaganda."
The northern branch of the Islamic Movement is led by Sheikh Raed Salah, who, according to UK Media Watch has

...endorsed classic anti-Semitic conspiracy theories about 9/11, reportedly advanced the Medieval blood libel against Jews, acknowledged providing funds to Hamas, has often used his authority as leader of the Islamic Movment’s Northern division to incite thousands of his followers to riot (and begin a Third Intifada) under the pretense that the Al-Aksa was in danger of being destroyed by Israeli authorities.

And, as an interview in 2003 made clear, Salah’s views on the rights of women and gays (and the virtues of Jihad) represents a classic example of his religiously inspired extremism.
More broadly, The Islamic Movement, which he leads, has clear goals of indoctrinating Israeli Arabs with his Islamist ideology (an effort the Movement calls da’wa).
In short, Raed Salah is an Islamic extremist  – and an unrepentant antisemite, misogynist and homophobe – who associates with terrorist movements and encourages his followers to engage in violence.
Elder of Ziyon has visited Raed Saleh's Facebook page and confirms these observations, noting that Saleh
...celebrated the murder of Jews praying a year ago with the Koranic quote "'How terrible will be the mourning of those who were warned'" - The heroic operation of Jerusalem 2014/11/18" 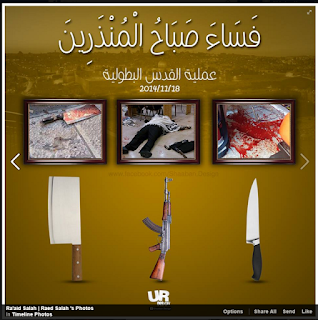 The smiley face is a nice touch 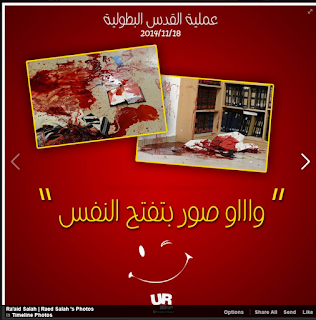 The Elder has more information on Saleh here
Although Sheikh Raed Salah celebrates and incites the murder of Jews, Bay Area member of Jewish Voice for Peace Hassan Fouda fawns all over him, proving again that JVP is neither Jewish, nor for peace