Stephen Zunes is a Professor of Politics and International Studies at the University of San Francisco, where he chairs the program in Middle Eastern Studies. He is well known for his anti-Israel rhetoric.

You'd think the Chair of Middle East Studies in a large urban institution might have a working knowledge of the history, and geography of the region. After all, Prof. Zunes has traveled extensively in the area.

Yet Prof. Zunes recently posted this on his Facebook Page.   Fail.

So there we have it - an " expert" in the  Middle East mistakenly claimed photos from the Tobu World Square theme park in Japan  (1/25 scale, incidentally!) were taken in Egypt. 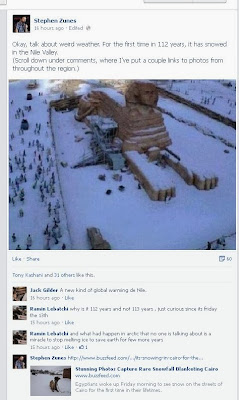 If San Francisco University's Professor and Mid East "expert'  Stephen Zunes  is so easily fooled, pity his poor students.  Lets see how long it takes for him to discover his mistake.

As of Sunday at noon,  Dec. 15 the post has been removed by Prof. Zunes

Imagine that! I was in Vegas last week, and I could have sworn I saw the Eiffel Tower.

Last time I was in Las Vegas I not only saw the Eiffel Tower, but the Statue of Liberty, The Sphinx, the Great Pyramid (I stayed there.), and sighted Elvis, Spiderman and Batman.

I was in Arizona last year . Could have sworn I saw London Bridge . Wait I did