In their desperation to claim a cultural heritage, where none existed before, the Palestinian Online store is marketing jewelry created from  "authentic" and "historic"  British Mandate coins. You can find this celebration of colonialism here 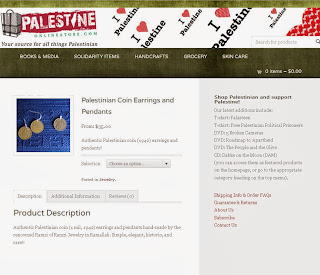 Possessing the international authority, the British began the process of creating a new monetary system for the Palestine Mandate. The legal framework governing the creation of coinage for the Mandate was initiated by the 1927 Palestine Currency Order. The Order specified that the standard of currency would be the Palestine Pound, which would be divided by 1,000 mils. Starting on the eve of the 10th anniversary of the Balfour Declaration (November 1, 1927), the coins were minted, as needed, to meet public demands. They would be used until the early 1950's. Selecting the design was a major challenge as religious symbols were strictly forbidden and all three official languages of the region (English, Hebrew, and Arabic) had to appear on the coins...

To conform to the Balfour Declaration, two additional Hebrew letters were added in parentheses next to the Hebrew script on the coins. These letters, the aleph and yod, were an abbreviation for Eretz Yisra'el, "The Land of Israel." This infuriated the Arab citizens who rioted in protest. Orthodox Jews were also displeased with the text as they believed only the Messiah from the house of David could reestablish the historical Kingdom of Israel. These conflicts still rage on today.


By selling the jewelry made with this coinage, the Palestine Online store is celebrating the British Mandate and the colonial history of the region, as well as the historical Jewish ties to this land.  Nice.
Posted by Dusty at 11:19 AM