The heaviest snowfall in decades has blocked roads across Israel  Nationwide, thousands of households are still without power and schools and governmental services are shuttered.

Twenty thousand households were still without power nationwide as of Saturday evening, including 8,000 in Jerusalem and its environs, as well as more than 1,000 in Safed. Some 80 villages around Jerusalem had been without power at the height of the storm, and some 30 were still disconnected on Saturday evening. At least three villages in the Golan Heights, which is better equipped to handle storms and snowfall, had been without electricity over the weekend, but were reconnected Saturday night.

Four deaths have been blamed on the weather.   The army said it was using armored vehicles to distribute aid to areas cut off by the bad weather.

Jerusalem Mayor Nir Barkat said his municipality was still working “in a state of emergency,” grappling with a “storm of extraordinary proportions.”

The damage caused by the storm was assessed at over $34 million, according to Israel Radio .

And because its Israel, volunteers distributed Shabbat Challah for those who couldn't make it to the market 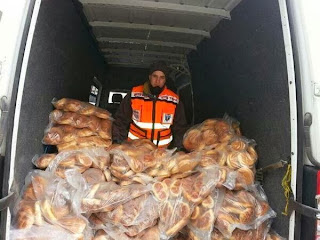 General Mahmoud Awad Damra (Abu Awad) assistant adviser to President Mahmoud Abbas for Provincial Affairs  has posted this photo of himself topless on Facebook, sipping a cup of coffee. 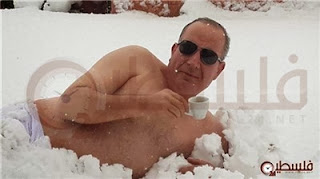 Keeping it classy.
Posted by Dusty at 2:15 PM