Mohammad Hammad issues a personal statement. Hint: its not an apology

An anonymous commenter points us to Mohammad Hammad's personal  statements about the incidents at San Francisco State University, published here.  Its not an apology.

Mohammed claims  that  posts threatening to stab and behead Israeli soldiers were part of his sardonic sense of humor, admitting that although they were "immature"  they were taken out of context.

He writes:
"An organization with a track record for hyperbole and misrepresentation has taken some of my old personal blog posts out of context."

Would that be the ADL?  Head Of Pro-Palestinian Student Group Posts Inflammatory Comments On Israel

Would that be CAMERA on Campus? President of Campus Palestinian Group Wants to Stab Israeli Soldiers

Would that be the AMCHA  Initiative?  President of SFSU Student Palestinian Group Puts Name and Face to IDF Soldier He Wants to Kill

The vast majority of the organizations charged with protecting the safety of the Jewish community have condemned Mohammad's words.  The vast majority of the organized Jewish community and the blogsphere also expressed their collective outrage.  What Mohammad describes as a  "smear campaign" against him, characterized by "selective quotations and other misrepresentation"   was the unified gasp of revulsion at his words by those who genuinely feared for the safety of Jewish students on campus.

To Mohammad- in what context would  this EVER be acceptable?

Anyone who thinks there can be peace with animals like this is absolutely delusional, and the only “peace” I’m interested in is the head of this fucking scum on a plate, as well as the heads of all others like her, and all others who support the IDF


The Liberation of Palestine can only come through the destruction and decimation of this Israeli plague and it can’t possibly come soon enough.”

You are calling for the genocide of 40% of the Jews on the planet.
Mohammad,  the entirety of your Tumblr post has been widely published. 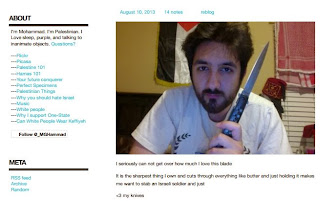 You captioned a photo of yourself holding a knife: “I seriously can not get over how much I love this blade. It is the sharpest thing I own and cuts through everything like butter and just holding it makes me want to stab an Israeli soldier.”

You provided the context. The photo and the caption were simply reproduced in their entirety. In what context is incitement to murder EVER acceptable?


Read Mohammad Hammad's personal statement here  and below.  See the narcissism and  moral bankruptcy of a young man who lacks the empathy to ever move beyond his cherished identity as victim. 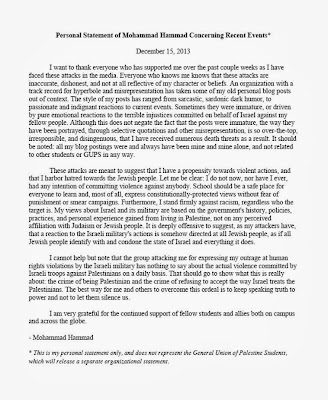 Taken out of context??!!

Let us hope that SFSU won't use this absurd statement as a pretext to close the case like UCSD did in 2010 when that woman from the Muslim Student Ass. told David Horowitz that she was "for" the statement by Hezbollah head Nasrallah that all the Jews should gather in Israel so as to make the job of hunting them down easier. When she issued a "clarification statement" UCSD proclaimed it was time to move on.

It is high time that universities be held accountable when Jewish students have to endure this crap and nothing is done.

Mock this pussy for his cowardice. He really, really wants to stab Jews. But instead of manning-up and going home to "Palestine" and putting his soft ass on the line, he's cowering in San Francisco, hiding behind a keyboard.