Crossing the line in London

St James Church in Piccadilly, London  has built a  replica of the Israeli security barrier as part of their holiday program  "Bethlehem Unwrapped"   Not the 97% that is a chain link fence- there is no drama in that.


St James’s Church, Piccadilly, in London’s West End has installed a life size 8 metre tall/30 metre long replica of Israel’s security wall in its courtyard as part of its Bethlehem Unwrapped festival. The replica wall is so vast that it obscures the Church itself.

The replica wall will be lit up at night and for the next twelve days of Christmas (until 5th January) a montage of images and slogans will be continuously projected onto it. Scenes include parts of London with a wall passing through it.

What you won’t see projected onto the replica wall are scenes of bombed out Israeli buses, hotels, pizza restaurants, bars and nightclubs that were ubiquitous in Israel before the wall.

Apparently the church has  have encouraged people to come along and write messages on their wall.

...Read this Facebook status from some friends of mine:


Sharon and Lesley again at the St James market place today armed with our bag of acrylic paint and wall brush. (SWU clearly not there – again)
With no support from anybody the sense was one of antagonism, being watched as we were by the wardens present it seemed, in case we dared to write on the wall. Seeing our paint Tom, a St James warden approached us to say we could only use their now worn out felt pens. Explaining the uselessness of those pens and the fact that others had used spray paint Debbie, another warden said she’d get us some of theirs. Returning a while later she produced grey – the shade they use to obliterate posts they don’t approve of. In the end Tom told me I could paint one message on a designated spot, provided I was professional and refrained from being abusive. Odd that seeing that others could write what and where they wanted as many times as they wanted!
So I painted This Wall Saves Lives, started to write that 1340 Israeli citizens have died as a result of terrorist attacks since 2000, but Tom’s space and location didn’t permit! 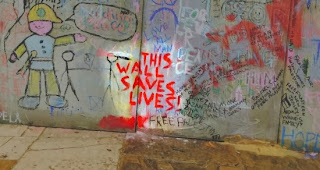 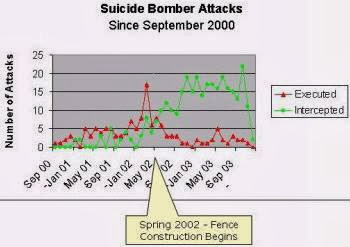 Sharon and Lesley's strategy  has precedent.  Several years back, a painting of Israel's security barrier appeared at the Santa Clara Palestinian Cultural Day Commemoration. Viewers  were encouraged to interact with the piece- markers were provided

The message "Israel wants peace" was added to the painting of the security barrier.
An Israeli and a Palestinian flag were eventually added to Handela, turning him into an effective symbol of peaceful co-existence.  Nice touch.

The anti-Israel cru have invested too much time and money in this monstrosity to assume it will be shelved at the end of Christmas. I suspect London is just its debut performance.  It will likely be coming to a city near you.  Be prepared.

If anyone in London sees this, please write this message on the Wall of St. James church of islamofascism.

FROM THE RIVER TO THE SEA,
PALESTINE WILL NEVER BE!