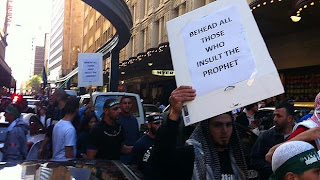 From the Sydney Morning Herald;

Eight people were arrested and six officers were injured after a protest swept through the Sydney CBD this afternoon.

Police said that, about 1pm today, a group marched from Sydney Town Hall to Martin Place, where a confrontation occurred between protesters and police outside a building housing the US consulate.

The protests were triggered by a US film, Innocence of Muslims, portraying the prophet Muhammad as a womaniser and paedophile.

Police said two of the injured officers are now in hospital. Two vehicles were also damaged.

Police used capsicum spray on the protesters, who at times pelted officers with bottles. Up to 500 people stormed through the city, working their way through Pitt Street before moving to Hyde Park amid a heavy police presence.

The protesters were pushed back as police dogs were deployed and capsicum spray was used.

Police made several arrests in Hyde Park amid violent confrontations with demonstrators....

Late in the afternoon a lone man from outside the group shouted: "Shame on you for promoting murder in the name of religion."

The crowd swarmed at him attacking him and sparking a second wave of violent clashes with police.

Police rushed to the man's aide and dragged him out of the park under a rain of waterbottles, sticks and abuse.

More Photos from the Sydney Riots 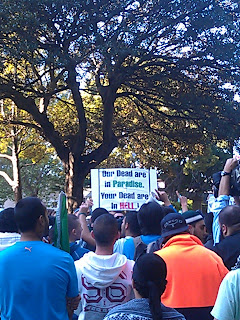 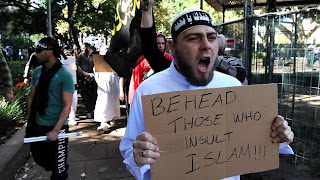 FURTHER UPDATES
From our friends at the Online Hate Prevention Institute

The violence should be condemned, but the Australian Muslim community as a whole is not to blame for it and is just as appalled at it as the rest of the Australian community.
Posted by Dusty at 8:05 AM