Ignoring months of threats, intimidation and bullying by the BDS cru, the Red Hot Chili Peppers rocked Tel Aviv tonight, playing to over 50,000 fans this evening.

Anthony Kiedis, Flea, Chad Smith and Josh Klinghoffer arrived in Israel from Turkey, landing at Ben-Gurion Airport in a private jet Sunday afternoon. Shortly after, they went to the Kotel in Jerusalem- holiest site for the Jewish people.

And the BDS'ers went crazy. From the facebook Page "Tag An Artist Against Apartheid", set up to harass artists scheduled to perform in Israel 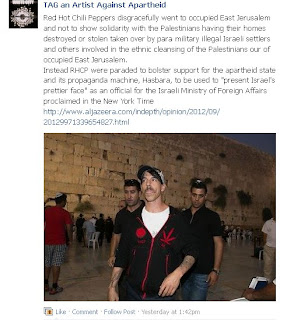 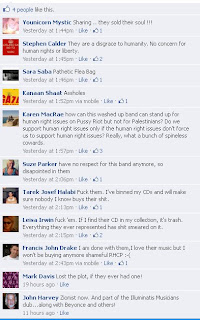 But the show went on.

From the Times of Israel

And the music was a joy. The Red Hot Chili Peppers are generally categorized as funk-rockers, but that sells them short. Flea and drummer Chad Smith propel every song infectiously forward — everybody, but everybody was dancing throughout — but there’s melody and harmony and subtlety to their music, too, and they replicated it onstage, outdoing their recorded versions with instrumental intros, layers of extra vocals, fresh keyboards and more. And they had Israeli trumpeter Avishai Cohen up on stage for two numbers for even more pep.

I'm thinking "BDS fail". Again. Only the addled brain of BDS'er and anti-Israel activist Remi Kanazi (who called the campaign to bully the RHCP a "success" )could think otherwise.

great article thanks for posting it!