A group of seven hate-niks, led by the notorious Noura Khouri, a woman of staggering  hubris and ignorance who once accused Glide's Reverend Cecil Williams of "overt racism" was arrested this evening attempting to crash the annual AIPAC dinner. 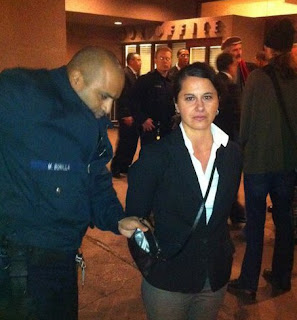 Noura Khouri of the AFSC, arrested at AIPAC


The dinner at the Oakland Marriott, one of 4 sold out venues in the Bay area hosted hundreds of AIPaC supporters that were unaware of the disturbance in the lobby.

Immediately after entering the lobby, the group was surrounded by security personnel. The group then inexplicably broke into song.

More details and photos as they come available.
True to form, the charming folks at Stop AIPAC sent out a press release, immediately declaring victory over the mighty lobby.

It has been proposed that the seven currently in custody in Oakland be traded in a prisoner exchange for Gilad Shalit.
Posted by Dusty at 12:54 AM

"The group then inexplicably broke into song."

The Arab Resource Organizing center said it was a flash mob. Apparently one is planned for San Francisco AIPAC, too.

So, since when do 6 people and a photographer constitute a mob?

This is really interesting and very indicative of whats been called the red/green alliance. The public endorsers of the Protest of AIPAC included:

But privately, on their restricted email lists, organizations such as the Arab Resource Organizing center also publicized it. Why didn't they publiclly endorse it? Why do they attempt to hide their involvement?

Leslie Angeline was the Code Pink air plant who participated in the two hour hunger strike in front of the Egyptian consulate, documented here:
http://houston.indymedia.org/news/2010/01/69512.php

Gene St. Onge and Janet Kobren were blockade runners on the Gaza flotilla.

Valerie Ortiz is a student at UC Santa Cruz

Martha Hubert is with Code Pink

Is the spelling of Peter Tcherneff correct? Is there any chance he could be Peter Tscherneff who has publicly declared that he is a "mind controlled slave of Dr. Mengele in the San Francisco Bay Area"? If the answer is yes, he's probably with Code pink as well.

Get the idea they didn't use the smart ones for this "action"?

RANDOM QUOTE: "There was an incident involving Peter Tscherneff who apparently had alters activated by handlers while at the meeting, and that Doug revealed out of nowhere to Dr Ott: "oh yeah, Peter is microchipped and wired" - compromising the confidentiality of the meeting."

RANDOM QUOTE: "Peter Alexander Tscherneff was sexually abused by a Roman Catholic pedophile priests in Pennsylvania and secretly shipped to Sonoma County, California (home of Bohemian Grove), when he was only 8 years old to be mind-controlled and programmed. He had no memory of the crimes Dr. Josef Mengele programmed him to commit, until he was in his 40′s."

RANDOM QUOTE: "Peter was shocked to learn that he had recalls of being mind-controlled in America by Dr. Josef Mengele, the World War II Nazi concentration camp torturer & murder of hundreds of victims, even thousands, before the CIA & military brought “Dr. Death” to the USA to continue his mind control,
torture & murder experiments. In America, the CIA defined them as Project MKUltra and Monarch mind-control, and they continue today."

EXCERPT: "Peter Tscherneff composes poems to the council weaving commentary on current events with his opinions about the evils of eating meat."

Hmmm. The press release sent out by Rae Abileah. ( who appears to be a member of every single anti Israel group in the bay area ) called him a " journalist".

Called him a "journalist"

Her. According to Codepink, he's a 'her'.
http://www.codepinkalert.org/article.php?id=335
They may be confused.

In any case, she appears to be one of those unemployable poseurs that make it their life's work to dabble in revolution. The Bay Area is filled with his or her odious type.

Rae is a woman. Peter (the "journalist") is a man. And together they form an insurmountable tin foil hat brigade

I once thought Code Pink to be a group of women dedicated to fertile wombs, not a bunch of aging hippies who hate Jews. Go figure.


View the "Flash mob Fail of the Day", where Noura Khouri shows that her people don't got ryhthm, either