Helen Thomas, 90, spoke at a workshop on anti Arab bias at Byblos Banquet Center in Dearborn Michigan Thursday, Dec. 2, 2010, and scratched the surface of nearly every anti-Semitic medieval canard, remembering that substituting the word "Zionist" for Jew functions as a "get out of jail free" card, and makes everything ok.

Claiming that "You can not say anything (critical) about Israel in this country.", she went on to criticize Israel. "We are owned by propagandists against the Arabs. There's no question about that. Congress, the White House, and Hollywood, Wall Street, are owned by the Zionists. No question in my opinion. They put their money where there mouth is…We're being pushed into a wrong direction in every way."

"I can call a president of the United States anything in the book but I can't touch Israel, which has Jewish-only roads in the West Bank," Thomas said. "No American would tolerate that -- white-only roads." 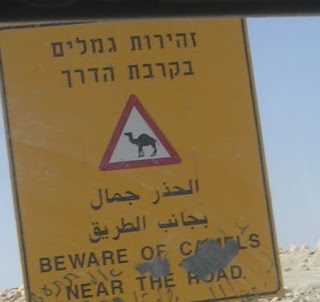 Helen darling, if the roads in Israel are Jew only, why do they bother making highway signs in English, Arabic and Hebrew?

She’s right that no American would tolerate white-only roads. Israelis, likewise, would never tolerate roads for Jews only. That’s why such roads don’t exist.

The roads she’s referring to in the West Bank are Israeli, and they’re not just for Jews. Israeli Arabs can drive on them, and so can non-Jewish foreigners, including Arab and Muslim foreigners. Palestinians were once able to drive on them but have not been allowed to do so since the second intifada, when suicide bombers used them to penetrate Tel Aviv and Jerusalem in order to massacre people.

There are also, by the way, Palestinian roads in the West Bank that Israelis can’t use.

For 57 years, this anti-Semite has been reporting the news. Does anyone actually believe she's been impartial?
Posted by Dusty at 10:46 AM

Damn I wish that racist wreck would shut her hatefilled mouth!