No REAL Plan for Israel 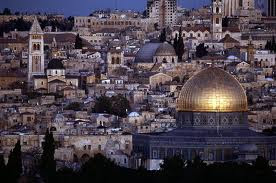 NOTE TO READER: While the idea that assigning the United Nations as the premier, international body to adjudicate the Israeli-Palestinian conflict is appealing, can the writer truly be on earth to NOT know the vehement, anti-Israelism that exists among Arab and Muslim UN member states today which sours any fair treatment? One need only to look at the UN Human Rights Commission which Alejandro Wolff, former Deputy Permanent U.S. Representative to the United Nations (2005-2010), accused of having "a pathological obsession with Israel" for focusing resolution after resolution against the Jewish State but ignoring violators such as Cuba and Belarus.

But the demographic challenge which is used to taunt Jews in Israel with such conundrums as do they want a democratic country or do they want a Jewish country (as if the two were mutually exclusive) may not be true at all. The population of the West Bank and the Gaza Strip totals no more than 2.7 million people, according to Bennett Zimmerman and Michael Wise in "Defusing the Demographic Time Bomb" ( 2008). A simple fact check at the United Nations website reveals that fertility rates ranks the Gaza Strip at 20th and the West Bank at 50th in birth rates. An American University of Beirut study also corroborates a significant decline in Palestinian fertility levels, especially in the West Bank, based on extensive and large-scale household interviews and registration records of births. The Palestinian birthrate has not kept pace with expectations. Add in double-counted persons and Palestinians that live abroad, and the "demographic threat" disappears. ---- Becky Johnson: One Woman Talking

A U.N. Plan for Israel

The blogger Andrew Sullivan has called America’s policy toward Israel “assisted suicide.” That may be an exaggeration, but on Friday it became less of one. The occasion was a speech by Hillary Clinton, much anticipated after the collapse of talks between Israelis and Palestinians.

The good news is that Clinton sees the peril that Israel is moving toward. “The ever-evolving technology of war” means that, in the absence of a peace deal, “it will be increasingly difficult to guarantee the security of Israeli families.”

Further, “long-term population trends … are endangering the Zionist vision of a Jewish and democratic state.”Translation (with embellishment): If there is no two-state solution, Israel can either

(a) give Palestinians in the occupied territories the vote and watch as the Arab birth rate turns Israeli Jews into a minority; or
(b) keep denying the vote to Arabs it has ruled for decades, thus incurring charges of apartheid, moving toward pariah status among nations, continuing to give propaganda fuel to regional troublemakers and raising the chances of disastrous war.

Sadly, here is the policy Clinton unveiled to avert this catastrophe: America will talk to the two sides about what they might say should they ever talk to each other. As The New York Times headline put it, “Clinton Says U.S. Is Committed to Mideast Peace but Reverting to Old Strategy.” You’re familiar with how well that strategy worked?There is a strategy that could actually work.

It would take boldness on President Obama’s part, but it could win him a place in history and the enduring gratitude of most Jews and Palestinians. Seizing the opportunity involves first seeing the flaw in one premise of our current policy. As Clinton put that premise on Friday, “The United States and the international community cannot impose a solution. Sometimes I think both parties seem to think we can. We cannot.”

Yes we can.The United Nations created a Jewish state six decades ago, and it can create a Palestinian state now. It can define the borders, set the timetable and lay down the rules for Palestinian elections (specifying, for example, that the winners must swear allegiance to a constitution that acknowledges Israel’s right to exist).

Establishing such a state would involve more tricky issues than can be addressed in this space. (I take a stab at some of them atwww.progressiverealist.org/UN2states.) But, however messy this solution may seem, it looks pretty good when you realize how hopeless the current process is.

Palestinians and Israelis have taken turns impeding this process, and lately Israel has been in the lead. A raft of American inducements failed to get Prime Minister Benjamin Netanyahu to forgo for even three months the construction of Israeli settlements that are banned under international law. It would be nice to think that this is just a phase, the product of an ephemeral far-right coalition. But there are signs that Israel’s drift to the right runs deep.

Only last week the chief rabbis in dozens of Israeli municipalities — who get government salaries — decreed that landlords shouldn’t rent to non-Jews. Meanwhile, hard-line settlers are systematically populating the upper levels of the military. And moderates seem to be heading for the exits. From 2000 to 2009 the number of Israelis applying for permanent residence in America nearly doubled.

Every day, settlement construction — especially in East Jerusalem — makes it harder to imagine two-state borders that would leave Palestinians with the minimal dignity necessary for lasting peace. As chances of a deal shrink, international impatience grows. This month Brazil and Argentina recognized a Palestinian state with 1967 borders.

By comparison, a United Nations solution looks Israel-friendly. Borders could be drawn to accommodate some of the thickest Israeli settlements along the 1967 lines (while giving the new Palestinian state land in exchange). But perhaps the biggest advantage is the political cover this approach would give President Obama.

Sure, he’d have to endure some noise from America’s Israel lobby. But at least he’d have to put on his noise-canceling headphones only twice: (1) when he agreed to explore this path with other members of the “quartet” — the European Union, Russia, the United Nations; (2) when the quartet, having produced a plan, handed it to the Security Council, at which point America would vote for it, or at least not veto it.

By contrast, the current path involves Obama taking political heat every time he tries to move Netanyahu a few inches toward the goal line. And there are 97 yards to go.

A prediction: if the United Nations does take the initiative, domestic resistance will be largely confined to the right wing of American Jewish opinion. Vast numbers of American (and Israeli) Jews will rally to the plan, because lasting peace will finally be within reach.

This Op-Ed column appeared in print on December 14, 2010. Postscript: Several months ago Amjad Atallah and Bassma Kodmani proposed that, in the event that Israeli-Palestinian negotiations collapsed, as they now have, the United Nations should take action different from what I’m advocating: “to obtain United Nations membership for [a Palestinian] state along with a Security Council resolution in which it assumes responsibility for finalizing the terms of a two-state deal.” For an argument that the collapse of negotiations could be a “potentially useful, clarifying moment,” see this very smart essay by Daniel Levy (who was on the Israeli negotiating team at the Taba talks in 2001) in The National Interest.
Posted by Becky Johnson at 8:14 PM