MAS: A Week to Remember Gaza

The curiously named "Muslim American Freedom society" has just declared the week of January 24-30, 2011 , a Week to Remember the Plight of Gaza. What exactly is the plight they are referring to? Is it getting too hard to get reservations at Roots, the gourmet destination of Gaza City? Is the new Olympic sized swimming pool too crowded? Or is the waiting list too long for one of the new25,000 new housing units being built in Gaza? (Here's a hint: families of martyrs have priority in grabbing one of the new units)

From the MAS (their mailing in italics):
As part of our year-long commitment to the End the Embargo-Let Gaza Live Campaign, the Muslim American Society Freedom announces the Gaza Not Forgotten week of January 24-30, 2011 .

This week is planned as a time of information dissemination, public engagement, and mass appeals for the end of the nearly five years of a crippling economic blockade

Don't you think it would help the cause of peace to can the hyperbole, people? What crippling economic blockade? Bloomberg Financial news reported 16 % economic growth in Gaza, in the first half of this year.

… imposed on the people of Gaza by Israel, and to a lesser extent, Egypt, that had imposed overwhelming hardship and deprivation on the lives of nearly 1.5 million people in the Palestinian territory.

Some photos of that deprivation: 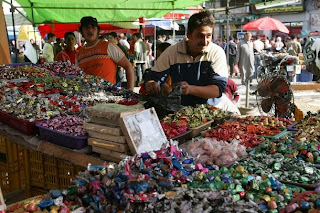 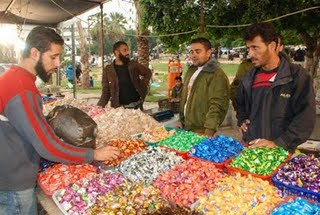 ….We do not accept that any trickle of token humanitarian relief to Gaza is a substitute for the complete end of the blockade, and we continue to call on President Obama to use the power and influence of his office to persuade his Israeli and Egyptian allies to end this embargo."

Some trickle. Aid to the Palestinians is the highest per capita in the world. Just this week , 1083 truckloads (26,167 tons) of goods were unloaded at the crossings, in addition to fuel. This "trickle" included rice, spices, wheat, salt, cooking oil ,legumes, produce (Fruits and Vegetables) meat, chicken and fish, flour, dairy products and sugar.

Additionally 4 truckloads of strawberries and flowers were exported from the Gaza Strip this week to the markets of Europe.

The Muslim American Society has been identified by the ADL as a " cover for anti-Semitism and extremism" , Abraham H. Foxman, ADL National Director described their annual conference as providing " a platform for extremist views calls into question the sincerity of the effort to serve as a legitimate counterbalance to radicalization. No legitimate blueprint for change can emerge from a convention permeated by messages conveying hatred of Jews, the denial of Israel's right to exist and the idea that the U.S. is at war with Islam.". Looks like "Gaza not Forgotten Week" will be more of the same
Posted by Dusty at 10:56 AM

Yes, it's true. Everyone who saw the Israeli bombing on Gaza and the killing of those Gazan children is anti-semitic.

There! Now you can quit working so hard to prove your bogus case.

Hmmm, LJansen, not a word from you on the thousands of rockets and missiles sent from Gaza to Israel. It's as though they don't count. After all, to you and yours killing civilians in Israel is "legitimate resistance".

If Israel were indiscriminately killing civilians in Gaza in the winter incursion last year, then why were so few of the victims female? The IDF death toll (the one I believe) says that just over 4% of those killed in the conflict were women. But even if we use the data on deaths issued by the Palestine Center for Human Rights, THEY report that 8% of the deaths were women.

If Israel really WERE bombing apartment buildings, schools, and mosques, wouldn't we expect the civilian death toll to be fairly even between deaths of men and deaths of women?

LJansen, are these photos bogus?