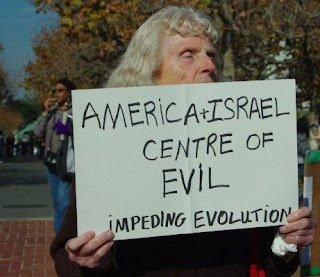 Every Friday for years, Berkeley Women in Black has made a practice of harassing students at UC Berkeley. Students at the University call this phenomenon "Black Friday". According to one blogger,
"The only thing more Berkeley than having an inflammatory opinion is gathering together a cadre of similarly-minded people and staging an unimpressive display to annoy passers-by."

Berkeley Women in Black have accused Israel and the Jewish people of controlling the media, government, and the banking industry for years. However on Friday Dec 4, Berkeley Women in Black (now including people of indeterminate gender) added a new accusation to the repertoire of dastardly Zionist deeds. Apparently the tag team of great Satan and little Satan is now "impeding evolution".

Berkeley Women in Black- bringing a bit of dreariness and surrealism into Berkeley, each and every Friday.
Posted by Dusty at 8:17 AM

Email ThisBlogThis!Share to TwitterShare to FacebookShare to Pinterest
Labels: Berkeley Women in Black

Now, as a Science fiction reader,I am quite intrigued as to exactly how we are "impeding evolution"? And, but for this impediment to evolution, what might we have evolved into by now? Giant brains, e.s.p., gills? The possibities are intriguing.