Pursuant the activists of Code Pink staging a two hour per day hunger strike outside the Egyptian consulate for three consecutive days, in solidarity with their companions touring Egypt, a correspondent sends the following letter:

"This afternoon with Code pink was delightful! They were thrilled to see us when we pulled up. Loved our table, chairs and cheery pink table cloth. Looked really, really confused when we started pulling out food. Turned ashen grey when we festooned them with Israeli flags. Had a lovely Egyptian boy translate the Arabic pages from Palestine today for Code Pink. Code Pink (nevertheless) insists all that food came in through the tunnels. "


The Code Pink activists involved in this jolly adventure are Nancy Mancias and Leslie Angeline.
[Steffy mentions them on her blog here: Code Pink, in other news.]

They intend to DELIBERATELY. NOT. EAT. while in the public view for two hours. Yesterday, today, and tomorrow. Two hours. Three days. Two hours of non-eating per day.
It will be hard. They want you to come witness their suffering.

Apparently the Egyptians are treating their visitors brutally, harassing and intimidating them with sumptuous buffets and air-conditioned tourist-class hotels, as well as the lovely sights and smells of Cairo. There are lots of picturesque spots suitable for snapshots and romantic moments in the bazaars and parks of MisrAlQahira (don't forget to visit the old city, fi wast al balad), as well as a lovely promenade in Alexandria ('Al Eskenderiyya') for quiet moments. The pyramids and the sphinx need no mention, of course, but you really should visit the Cairo Museum. Finish your day at one of the hundreds of exciting nightspots for which this Paris-on-the-Nile is justly famous!
It will be a trip that no revolutionary-pretendeur will ever forget.

Oooops, errrm, I mean, a number of the "activists" stuck in Egypt seem determined to starve themselves until the Egyptian government gets tired of them.
They don't like melookhia anyway!


NOTE: One of the tourists currently holding her own self hostage in Egypt is Hedy Epstein, who labels herself a holocaust survivor, despite having spent the war comfortably in England. She is well-known to many people, having been a professional pro-Arab speaker on behalf of the International Solidarity Movement, which functions as the collaborationist clearinghouse for Hamas, Hezbollah, and reportedly sometimes Iran


Enjoy the photos from the Code Pink "hunger strike" at the Egyptian Consulate in San Francisco: 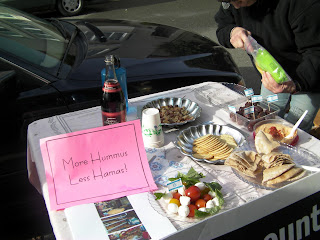 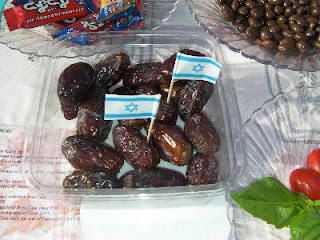 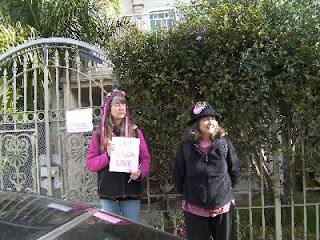 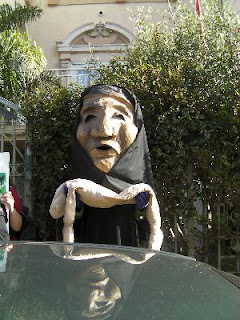 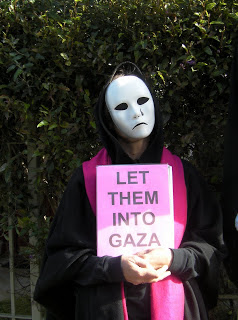 Apparently Egypt has agreed to let in 100 Code Pinkos for 24 hours. However will they choose? I'm guessing highest bidder?

So do the brigands in the Sinai. Most of whom are starved for cash.

Why, thank you for posting this, ATBOTH! We had a lovely talk with Kayla Starr of Code Pink at the consulate Dec. 28. She's a firm believer in dialog (especially when it interrupts other people's free speech ) She also thinks the free exchange of ideas is so important, except in the case of Israel, which MUST MUST MUST be subject to academic and cultural boycott, because no one cares what those Zionists have to say, anyway.

Apparently Code pink is having a sunrise Ocean beach bonfire on New Years day. A bunch of us are planning on going- please join us. It will be fun. Got any hot pink boas to burn?

Today at the Eygptian Consulate the pro Hamas crowd was out in force, wearing giant puppet heads and holding bloody dolls. A neighborhood child was so frightened by the scene that his Mom ended up calling the police.

JVP/Code Pink : when you frighten small children and make them cry, maybe its time to rethink your strategy.

Code Pink are so gosh darned dumb. You didn't need to set up a table- all you had to do was throw some cracked corn on the ground.

The December 30th mass emailing from Code pink urged subscribers that sometime during the period marking the Operation Cast Lead anniversary--December 27-January 18--you join them in remembrance by skipping a meal....


Skip a meal for Peace! Now thats a commitment we can really sink our teeth into...or not.

The purpose of Code Pink is to make its members feel significant, important, edgy. And if over a thousand people have to go broke dragging themselves to Cairo only to get arrested, beaten or ignored, that’s a small price to pay to let the Code Pink crew continue to dwell in their fantasy world.