A small selection of snapshots taken at the recent pro-Hamas rally in Union Square. Feel free to print them out and use them as postcards. 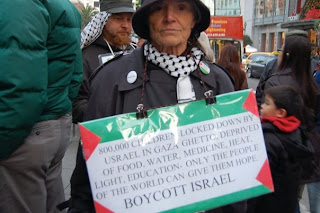 One of the tried and true tactics used by ideologues is to involve children as an element in the discourse to castigate the side that they oppose. Remarkably, that never works both ways - the Middle East Children's Alliance (MECA) standardly refuses to accept that Israelis have children ("those are all occupiers!), and is unconcerned entirely about children brutalized by Hamas.
Like many political "charities", MECA serves primarily as a vehicle of employment for its activists and founders.

If this woman's sign were true, there would now be eight hundred thousand dead children. 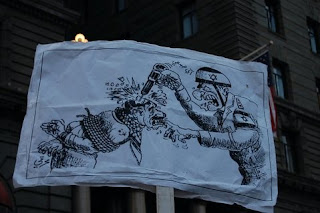 Not only is the soldier an anti-Semitic stereotype - so is his victim! By which we can see that the artist's attitude is not 'pro-Palestinian' but anti-Semitic in the broadest possible sense.
A more cliché and subhuman depiction of both sides is hard to imagine. The artist has no sympathy for either.

Using an electric drill to torture one's captives is a favorite tactic not only of Hamas, but also several other revolutionary groups in the Middle-East. It has been used to great effect by warlords and drugdealers in Lebanon as well as Hezbollah, by the Ba'ath governments of Syria and Iraq, and by various Arab intelligence services. 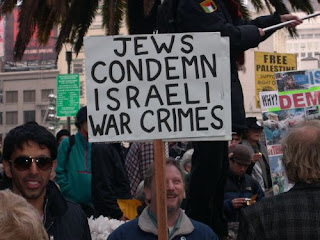 Odd Job Rob Kanter of Emeryville, a man remarkable for his inability to criticize any politically correct bigots.

I particularly remember the time he tried to justify chants by Arab-American activists that called Jews dogs ("al Yahud kalabna") and demanded that they be slaughtered ("itbach al Yahud"). He has (seemingly) never had a problem standing side by side with anyone who demonizes Israel, Jews, or the United States.

He is a member of the Anti-Zionist Jews ("IJAN") as well as Bay Area Women in Black.

To the best of my knowledge he is NOT a member of San Francisco chapter of Women in Black, as they do not permit men in their ranks, and are frequently nauseated by the presence of males (even once objecting that a nearby dog was of incorrect gender).

It is also unlikely that he is a member of Code Pink - Medea Benjamin prefers uncomplicated people. But like her, he supports Cuba, Venezuela, and Iran, and likes campfires and barbecues, holding hands, long walks on the beach, and practicing native American chants and spirituality.

At least, we presume so.

If Lily "Gets wet for dead Jews at the bottom of elevator shafts" Haskell was hetero, she and Rob might make a swell couple.