On the cluelessness of If Not Now

On the cluelessness of If Not Now 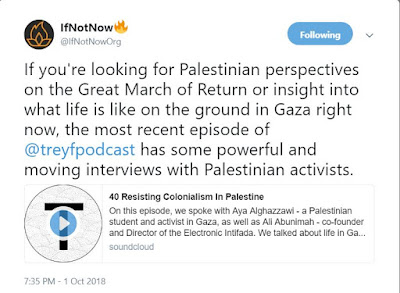 
Young men from one of the units operating at the #Gaza border Friday.

Email ThisBlogThis!Share to TwitterShare to FacebookShare to Pinterest
Labels: Gaza, If not Now, Jtruzmah, terror

Hello Dusty, Thanks for your blog. I would like to ask you a few questions about Paul Larudee. Let me know if you would be interested.

Paul and I aren't really close, but if I can help, I'd be happy to try.

i recognize that still image from this play acting Pallywood video. that crowd was basically being directed like a theater production rehearsal.

Hello Dusty - No worries. I believe Paul Larudee is the treasurer of the Syria Solidarity Movement, which seems odd since he always seems to need financial assistance. Do you know anything about his involvement with the group?

Paul fundraises under the auspices of the " Association for Investment in Popular Action Committees", which he runs out of his home. His 990 from last year shows 85,000+ in assets, but yeah he is constantly fundraising to pay for his lifestyle and his multiple trips abroad. He's become a fringe personality in the local anti-Israel scene- in part because of his support and promotion of notorious anti-Semite Gilad Atzmon and partly because of his failed high profile ventures (does anyone remember the Global March to Jerusalem?).

I'll see what I can find out about his involvement with the various Syria groups. Please sent me your name and your organization- I will not publish it

Yes- Paul sent out this plea for tech support last year. It links all his organizations together:

We are a tax exempt human rights nonprofit engaged in social causes. We are seeking a candidate to manage, update and build traffic to our websites and increase our social media presence. This includes fundraising through online stores at some of the sites, as well as through outlets like eBay, Amazon, etc.

The candidate will be someone who is active in the causes that we serve, mainly in support of Palestinian rights, including resistance to Israeli oppression and ethnic cleansing, as well as Syria’s defense of its sovereignty and the right of the Syrian people to determine their own government without foreign attempts to overthrow or otherwise interfere in the internal affairs of Syria.

Good web skills are essential, as well as a sense of marketing. Technical skills will be an asset, although we can provide access to technical expertise as needed.

The candidate will interface with volunteers in the projects that the websites serve, and will monitor activities in those communities to the extent that such information is required in order to update the websites and their event calendars.

We expect to pay $15/hr to start, payable through Upwork, up to 100 hours per month. If performance boosts sales and donations sufficiently, we will gladly increase both the hours and the pay rate.

Ability to post neatly in Wordpress. What we mean by neatly is having images aligned properly, keeping text and typography consistent, and formatting press releases made in word processing software so they look proper in Wordpress
Knowledge of MailChimp or equivalent bulk email software
Social media savvy
Passion for helping non profits involved in Syria and Palestine solidarity

This is the first newsletter of the Syria Solidarity Movement. Many of you supported our work as part of the Free Palestine Movement, which sent delegations to two Gaza Flotillas and participated in several billboards and bus ads for Palestinian human rights.

More recently, you provided funds for one delegate (Paul Larudee) and part of the funds for another (Amir Massoumi) to participate in a peace delegation to Syria, led by Nobel Peace Laureate Mairead Maguire, and you received dispatches describing the visit and the findings of the delegation.

We pledged that any further Syria advocacy would be separate from the Free Palestine Movement, and the creation of the Syria Solidarity Movement is a fulfillment of that pledge. We recognize that some of you may wish to be on only one of the two lists, and we will of course unsubscribe you if you wish. However, both lists will be active only when there is something to report or some action that we ask you to take.

We are not the voice of the Syrian people, but we are the voice of people throughout the world – and especially those who are in countries whose governments are part of the problem – who listen to the Syrian people. Syrians do not speak with a unanimous voice, but our solidarity is based upon principles that many of them have articulated, and which accord with international law and standards, as follows:
Above all else, we respect Syrian solutions to Syrian problems.
We oppose all military intervention in Syria, including the provision of any arms, military training, intelligence, personnel or equipment except for the purpose of national self defense.
We advocate a reduction of arms and a ceasefire by all combatants.
We advocate massive provision of humanitarian aid for all displaced Syrians, wherever they may be, including Syrian territory. This aid should be administered under the supervision of the United Nations or similar international agencies.
We advocate a Syrian national dialogue under international auspices, in a location and with protections and guarantees that permit all parties to feel safe, and without the exclusion of any parties.
Some argue that we should include other principles, such as advocacy of a secular society and a government based on nondiscrimination and human rights. Although we understand and respect such arguments, we believe that it is not our place to make such declarations, but rather to support Syrian declarations of their principles.

We will shortly be reporting to you about some of our ongoing activities, including actions to prevent U.S. military intervention in Syria, a North American tour by Mother Agnes-Mariam of Mussallaha ("Reconciliation"), the peace organization in Syria that invited the international peace delegation in May, 2013, the gathering of deterrence volunteers in Syria to defy military intervention, and other activities.

We welcome your participation and your inquiries.