His name is Salim Ahmad Nasser.  He violently attacked a peaceful celebration in honor of Israel's independence in San Francisco.  The attack was witnessed by members of the San Francisco Police Department and by dozens of others.  And yet he was released without consequence, by an impotent police department that just couldn't be bothered protecting the first amendment rights of the Jewish community

The "catch and release" policies of the San Francisco police department jeopardize free speech and lawful assembly in our community, and sends a message to Jewish community members that if they take to the streets, they do it alone.

The release of Salim Ahmad Nasser is just one in a series of incidents where attacks on Jewish community members  have been ignored by the police department.


In the police report, filed on May 15  2018, Salim Nasser is described as "extremely angry" and "aggressive".  He was heard yelling profanities at the pro-Israel crowd that had gathered in celebration of Israel's 70th anniversary. The police readily admit witnessing his assault on a young man with an Israeli flag.  Nasser admitted knocking the young man to the ground.   He is taken away, and summarily released.  There is no consequence to his action.   There was no jail time.  No restraining order to keep him from attacking peaceful protests in the future. 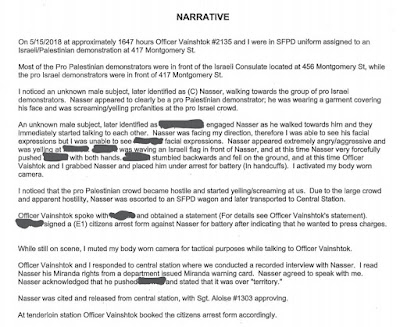 The message to the pro-Israel and the Jewish community is chilling.   The San Francisco Police Department is not committed to protecting our constitutional rights or our personal safety.  SFPD- you can do better.  We need you to do better.
Posted by Dusty at 7:17 PM

For those of you who live in the Hayward area be sure to not vote for aisha wahab for city council in November. She is endorsed by rabid anti-Israel representative Ro Khanna.