Maps of Disappearing Palestine: The Prequel 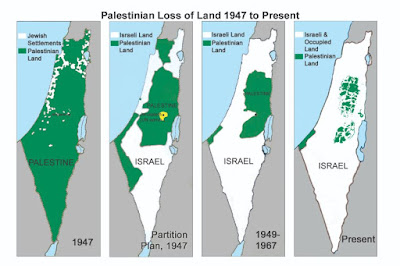 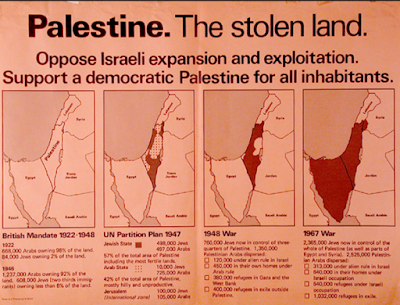 The subtle change in language is fascinating, and is reflective of the attempts to create a serviceable Palestinian narrative suitable for Western consumption.

The earlier map (circa 1967) refers to Arab land- the Palestinians had not yet become a "people".  It also acknowledges the area was under the British mandate- and was not an independent Palestinian state. Surprisingly the first panel documents the tremendous growth of the Arab population during the years of the mandate,  as economic migrants were drawn to the economic opportunities created by the Zionist pioneers.

The influx of workers from across the Arab world into pre-state Israel was well documented.

Robert F Kennedy, a cub reporter for the Boston Post stationed in Mandate Palestine wrote in 1948:

The Jews point with pride to the fact that over 500,000 Arabs, in the 12 years between 1932 and 1944, came into Palestine to take advantage of living conditions existing in no other Arab state. This is the only country in the Near and Middle East where an Arab middle class is in existence.

From the July 1934 Journal of Foreign Affairs:

There is a constant infiltration of Arab labor, on which there can scarcely be a practical check, from neighboring Arab lands.  It will increase as the country's prosperity increases. The crossings of the River Jordan are barred for eastward Jewish Traffic, but there is traffic westward for the Arabs of Transjordan....The Jews are not permitted to develop Transjordan; its Arab inhabitants are free to come in to Palestine to take advantage of opportunities of employment which do not exist on their home country and which have only been created in Palestine by Jewish capital and Jewish enterprise.

The second panel describes the terms of the UN partition plan,  conveniently leaving out the fact that the Jewish population agreed to the division of land, and the Arab population turned it down.  60 percent of the land allocated to the Jewish state was to be the arid desert in the Negev.

The third panel shows the aftermath of Israel's war of independence, and neglects to mention Jordan's control of the West Bank, or Egypt's control over Gaza.  Instead\ they describe it as  Palestinian Arabs  "in their own homes under Arab rule".  Contrary to the usual claims of 650,000 refugees, this  claims 400,000  "refugees in exile outside Palestine".

The last panel shows the conclusion of the 6 day war.  In this defensive war,  Israel reclaimed its historic heartland- Judea and Samaria, and captured the Sinai peninsula and Gaza. This is the map deliberately excluded from the modern incarnation- because the return of the Sinai Peninsula to Egypt proved Israel's commitment of land for peace.

Both the 1967 map and its more modern counterpart misrepresent residency, ownership and sovereignty, and provide evidence, yet again, that while the Jewish people have history,  the Palestinian people  continually struggle to create a convincing "narrative".  Nothing has changed in 50 years.

They left out the first map, Palestine 1918.

This description also leaves out how it was Jewish people who bought and developed the coastal areas. This was land that was uninhabitable because of malarial mosquitoes. It became stable and inevitable because of Jewish pioneers who drained marshes and desalinated the soil.