Airbnb is the company everyone loves to hate, until they are looking for the perfect charming low-cost vacation rental with a view of the surf.  Because they refuse to discriminate against Jews who list their homes in Judea and Samaria,  Airbnb  has been in the Israel's hater cross-hairs for some time now.
Jewish Voice for Peace and friends launched the Stolen Homes campaign, which follows the JVP formulaic and entirely predictable modus operandi.  A petition!   A hashtag!  Aging hippies holding signs!
No doubt the 30 billion dollar company was left quaking  in its shoes. No! Not hippies holding signs!
Earlier this year the hard left National Lawyers Guild passed a  resolution by a vote of 67% to 33%  to boycott Airbnb, declaring:
Whereas: Airbnb, the biggest listing service for short term and vacation rental housing, recently began listing rentals in illegal Israeli settlements in the West Bank, and thus both the websites and their users glean profit from stolen land. These settlements are in violation of the Fourth Geneva Convention, which prohibits an occupying power from moving its civilian population onto the land it is occupying. There are over 650,000 Jewish settlers living in the West Bank and East Jerusalem, and settlement growth is rapidly increasing. Israeli settlements serve an exclusionary, Jewish-only population, are a clear form of state segregation. Settlers confiscate Palestinian land, homes, and resources, severely restrict Palestinian freedom of movement, and prevent any possibility of a contiguous Palestinian State. By listing homes in Israeli settlements, and earning a 9 to 15 percent fee from hosts and guests, Airbnb directly profits from and promotes Israeli apartheid and land theft.
Airbnb has steadfastly ignored the Israel haters, even hosting a wedding at the Airbnb Headquarters  at 888 Brannan St, San Francisco for a couple who met through its listings in Israel. After a  initial Airbnb-related misunderstanding,  Ben from San Francisco enjoyed a blossoming romance with Tel Aviv's Noa.
From SF Gate:
"We wanted a private marriage ceremony but in a place that would be meaningful to us, [and] the Airbnb office seemed like a cool idea since we had met through Airbnb two years ago," the couple tells SFGATE. "We loved the Airbnb atrium and headquarters. We had great help from the staff and one of the founders, Joe [Gebbia]."
Airbnb has cancelled the listings of those that discriminate against Israelis.  During the recent fires in Israel, Airbnb took the compassionate step of waiving its service fees for those who opened their listings to victims of the fire.

Airbnb set up "disaster response" page to help match hosts with guests and waived all posting and service fees. Those hosting for free were still be covered by standard Airbnb insurance policies.

The Israel-haters don’t seem to be hurting Airbnb at all.
In July 2015, Airbnb raised $1.6 billion at a $25.6 billion valuation, according to Equidate. With the $850 million disclosed in last week’s filing, Airbnb has raised about $3.2 billion in equity.
Why has the campaign against Airbnb turned into yet another BDS fail? Could it be as simple as good old fashioned hypocrisy?
Rachel Lederman is the president of the San Francisco Chapter of National Lawyers Guild. Her Airbnb profile is available online. Perhaps she didn't get the Guild memo. Perhaps she was one of the 33% of the Guild members who voted against the boycott. Or perhaps she is one of those virtual signaling   “Do as I say, not as I do” activists. 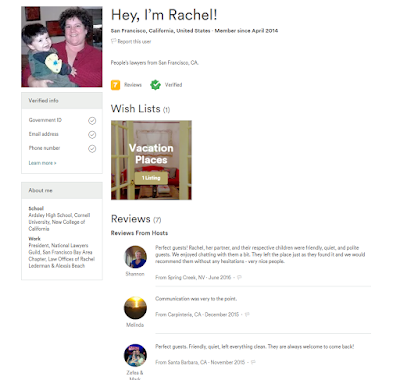 Andy Griggs and Emma Rosenthal are members of  Labor for Palestine, the  Los Angeles Palestine Labor Solidarity Committee and the Cafe Intifada, and have been involved in many social media campaigns designed to demonize the only democracy in the Middle east.  No one doubts their commitment to quashing the state of the Jewish people,  unless of course, their personal livelihood is involved. That would be different.
Andy and Emma list rooms at their Dragonfly Hill Urban farm on Airbnb, and choose to ignore the “call from Palestinian civil society” ostensibly because it might interfere with their bottom line.  They’ll endlessly harangue community organizations to divest "from companies doing business in Israel", but they can not be bothered to do so themselves. 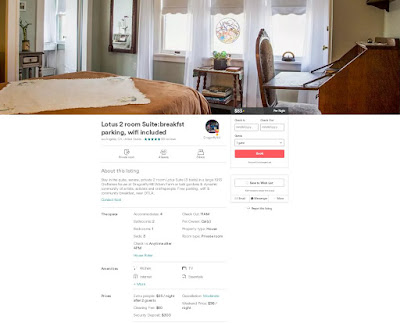 Makes me wonder. Could self righteous virtue signalling hypocrites be at the core of the failure of the BDS movement  in America?

My daughter works for an Israeli web-hosting companies. A number of activist groups pay the Israeli company to host their anti-Israel pro-BDS propaganda. In contrast to this, a lot of the BDS activity seems to be focused on boycotting American companies such as Tribe or Sabra, which sell humus entirely manufactured in the United States, or Caterpillar, an American industrial powerhouse. The BDS movement is a lot of smoke, but contrary to the aphorism, no fire.

Caterpillar was the best performing stock of 2016 so far, up 41%. That counts as a BDS fail