NGO Monitor may have said it best:

Jewish Voice for Peace (JVP) is a U.S.-based organization, which views itself as the “Jewish wing” of the Palestinian solidarity movement.  Though JVP regards the organized Jewish community as its “enemy” and “opponent,” it nonetheless demands a seat at the communal table.  The strategy, as stated by JVP’s executive director Rebecca Vilkomerson, is to create “a wedge” within the American Jewish community to generate the impression of polarization over Israel.  The tactic is to dilute support for Israel in the Jewish community, toward the goal of reducing or eliminating the United States government’s economic, military, and political support for Israel.

How do you create the illusion of polarization on Israel when the vast majority of Jews worldwide and in America  feel differently?

After all, according to a recent Pew Research Center poll,

Jewish Americans feel a strong emotional connection with the Jewish state: A solid majority say they are either “very” or “somewhat” attached to Israel and that caring about Israel is either “essential” or “important” to what being Jewish means to them.

The Israel-haters at Jewish Voice for Peace have a strategy. Their current obsession is squashing any potential legislature that acknowledges and counters rising anti-Semitism. There is only one group of righteous victims to JVP, and its not the Jews.

Jewish Voice for Peace has launched a pressure campaign directed against the Jewish Federations of North America asking them to withdraw their support for the "Anti-Semitism Awareness Act", which has been unanimously approved by the US Senate. 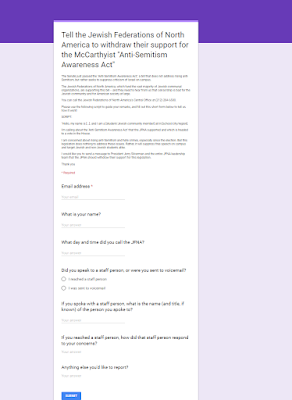 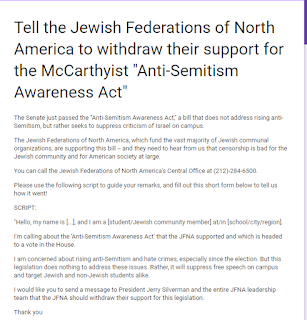 This call to action was publicized on the Students for Justice in Palestine Facebook Page. 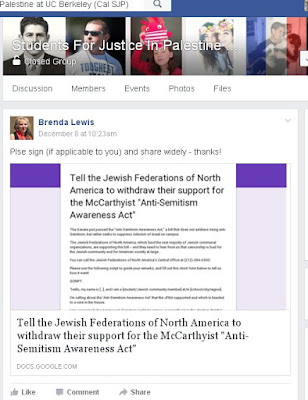 Call me a cynic, but I strongly doubt that members of JVP or SJP are contributors to the Jewish Federations of North America, which pledges to "work tirelessly to deepen connections between the Jewish State and the global Jewish community."  Groups and individuals operating in direct opposition to the mission of the Federation should not get a say in formulating group policy. The scripted calls by sock puppet accounts should be soundly ignored.

these days you know any group with a name that starts off as "Jewish voice... " is gonna be bad news. case and point have look at Germany . . .
http://www.jpost.com/Diaspora/German-bank-closed-account-due-to-BDS-and-ethic-violation-475156

In that photo of JVP- I recognize Hassan Fouda (not a Jew) and Andrew and Marina Gutierrez. Also, not Jews.

It gets worse. UC Irvine chancellor Howard Gillman and law school dean Erwin Chemerinsky have authored an op-ed in the Wall Street Journal in opposition to the Senate bill. below is my response, which I have sent to the Jerusalem Post and WSJ.