Time for (another) SJP public tantrum

A quarter million are dead in Syria. The entire region has erupted in chaos. But its October, and its time for the context be damned Students for Justice in Palestine  at U.C. Berkeley's  "But  pay attention to MEEEEEE"  very public tantrum.

We can expect the rhetoric of eternal victimhood, incendiary chants, and maybe a die-in or two.

Their announcement and their list of demands follow:
3rd Annual International Day of Action on University Campuses for Palestine

A call for activists and organizations on campuses across the world to organize massive protests on every college and university campus.

No to Academic Complicity with Israeli Occupation
No to Study Abroad Programs in Israel
No Investments in Apartheid and Occupation Supporting Companies
No to University Presidents' Visits to Israel
No Campus Police Training or Cooperation with Israeli Security
No Joint Research or Conferences with Israeli Institutions
No Cooperation with Hasbara Networks on College Campuses
No to Targeting Faculty for Speaking Against Israeli Crimes
No to Administrative Limits on Free Speech Rights of Palestine Activists
No to University Coordination and Strategizing with the ADL, JCRC, AJC, Stand With US, ZOA, Israeli Consulate to Limit Students Pro-Palestine Constitutionally Protected Activities.

This will be the second year Cheryl Davila is speaking at this event. Cheryl gained notoriety for hijacking the agenda of the Berkeley Human Welfare Commission for nearly a full year to push a divestment initiative, neglecting the poor of Berkeley in the process. Cheryl is now running for Berkeley City council from District 2, and has been looking towards SJP for some quid pro quo. 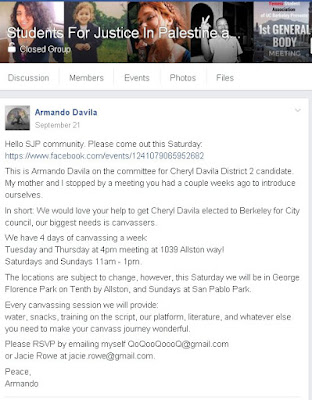 The people of Berkeley should know better to elect a councilperson beholden to such extremist special interests.

Pro-Israel groups are mobilizing as well, to counter the demonization and inflammatory rhetoric of the group that is commonly dubbed "Students for Just us in Palestine".

This should be interesting.

i see the co-opting of U.S. social justice issues is still alive and well by the muslim brother hood front groups on our universities.