Ever wonder who would support this? 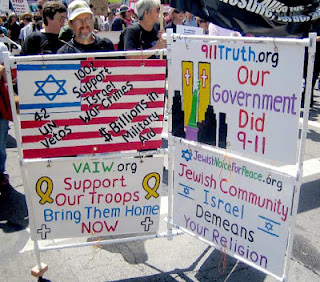 Thanks to NGO Monitor, now we have an answer. (And no, for the most part, its not the Jewish community)

In mapping JVP's funder/enablers, NGO Monitor accessed financial information
available through public IRS documents, as well as independent research into
individual foundations. NGO Monitor was able to identify the origins of much
of JVP's budget ($1.4 million in 2014); the rest remains secret.

"JVP's funders enable a variety of publicity stunts and counterproductive
campaigns, with the goal of provoking the American Jewish community,
immorally demonizing Israel, and shielding BDS groups from criticism,"
stated Professor Gerald Steinberg, president of NGO Monitor. "While some of
JVP's donors clearly know what they are supporting, others, it appears, do
not understand the damaging impact of their donations."

Some of these donors also support other groups leading the political warfare
against Israel.

Read the whole report here
Posted by Dusty at 9:05 PM

hardly surprising the tides foundation was started in san francisco and has received financial support for the wealthy kapo george sorros.