Having failed to destroy Israel through conventional warfare or with acts of terror, the outrage as a lifestyle choice folk now use BDS as their weapon of choice. Their hope is that boycotts divestment and sanctions   (BDS) will achieve the goals of demonizing Israel in the court of public opinion, eroding support for the Jewish state and eventually lead to the elimination of Israel.


Its been a long time in coming, but the forces of light are finally mobilizing.
On May 31st  Israel’s Mission to the UN will host 1500 students, organizations, and agencies from around the world at a summit aimed at training young people with practical advice and the resources to take on the toxic atmosphere created by BDS.
In an interview Monday with The Jewish Press, Israel’s UN Ambassador Danny Danon outlined a plan of action aimed at leveling the playing field against the Boycott Divestment Sanctions movement.
“The goal of the event is to empower students from around the world – not just from the US – by giving them the tools they need to fight back. By doing it at the United Nations, in the General Assembly, we send a clear message that we will not be silent. We are a strong nation and we will overcome this wave of incitement against the State of Israel,” explained Danon, “We can win, but in order to win, we – the State of Israel and world Jewish communities – have to work together in order to be strong and effective…”
Representatives from several Ministries will be arriving from Israel to take part in the May 31st event. The day will open with a plenary session in the UN General Assembly Hall and be followed by a series of professional panels, where experts from fields such as law and public diplomacy will work with students to hammer out guidelines and provide them with “Ambassadors Against BDS” kits to help implement a new cohesive plan of action.
BDS has been operating for almost 11 years. Its attempts to delegitimize Israel by pressuring businesses, intimidating academics, bullying artists, and the spreading of lies and messages of hate against Jews and Israel on college campuses, have seen more success than previous boycott attempts due to their centralized organization. “I see the work being done by the other side, the way they are organized on college campuses. I know that we can, and we must, be united as well. It’s crucial to understand that this needs to be a joint effort in order to be effective”.
Rabbi David Mivasair, a member of Jewish Voice for Peace’s Rabbinical Council responded to this news in a very un-rabbinic way.
On his Twitter account, Rabbi David Mivasair promoted sabotaging the registration process. 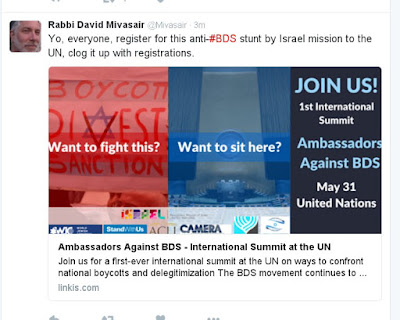 You might expect this sort of childish, immature act from self proclaimed anarchist or a high school activist, but not from a rabbi entrusted in providing spiritual guidance to international organization
Rabbi David Mivasair, I'd suggest you brush up on your Jewish readings. Start with Psalm 15:
A Psalm of David. O LORD, who may abide in Your tent? Who may dwell on Your holy hill?  He who walks with integrity, and works righteousness, And speaks truth in his heart.…
Rabbi David Mivasair joins JVP Rabbinical council member Rabbi Michael E. Feinberg as Rabbis most in need of spiritual guidance.

Not that most trump supporters aren't idiots but you know damn well these jvp and other alike minded bdsholes make up a large portion of bernie sander's support base. Makes me happier then ever that I'll be in Israel in two weeks time hanging out with friends and spending money. It'll be my 3rd time in Israel but my wife's first and I can't wait to show her how amazing Israel is.