Husam El-Qoulaq, a third-year law student at Harvard Law School has achieved his 15 minutes of fame using playground style taunts against a foreign dignitary. His outburst embarrassed and humiliated the school.

At an April 14, 2016  panel discussion on Israeli-Palestinian negotiations  El-Qoulaq childishly heckled Tzipi Livni during the question and answer period, asking “How is it that you are so smelly?”

Its more than immature- its anti-Semitic.
As reported by Canary Mission:

On April 18, 2016, three members of the Harvard Jewish Law Students Association demanded a public apology to Ms. Livni, the Jewish students of HLS, and Harvard Law School at large — and observed in response to El-Qoulaq’s question:

“A quick Internet search will show that the stereotype of “the Jew” as “smelly” or “dirty” has been around since at least the 1800s. The Nazis promoted the idea that Jews “smell” to propagandize Jews as an inferior people. The idea that Jews can be identified by a malodor is patently offensive and stereotypes Jews as an “other” which incites further acts of discrimination. The fact that such a hate-filled and outdated stereotype reemerged at Harvard Law School is nothing short of revolting.”

Harvard officials immediately condemned the exchange, but took care to conceal the name of the student involved. The university also deleted the portion of the video featuring the incident.

“The comment was offensive and it violated the trust and respect we expect in our community. Many perceive it as anti-Semitic, and no one would see it as appropriate. It was an embarrassment to this institution and an assault upon the values we seek to uphold.”

The Harvard Law Record took an unprecedented step by closing comments on an article regarding the incident, to prevent El-Qoulaq from being identified.

Why is Harvard bending over backwards to protect the identity of Husam El-Qoulaq?  Are his family major donors?

Husam El-Qoulaq graduated with a degree in peace and conflict studies from UC Berkeley, and served a stint as a volunteer commissioner on the City of Berkeley's foreign policy body, the Peace and Justice Commission.

Interestingly, his Linked in profile (since deleted) fraudulently implies he served on the Berkeley City Council. It is not known if he also misrepresented his status in his application to the Harvard law school.


Incidentally, the Fair Political Practices Commission in Sacramento, California sent El-Qoulaq a warning letter for failing to disclose his economic interests after leaving the Berkeley commission 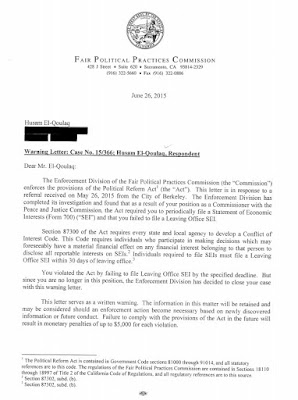 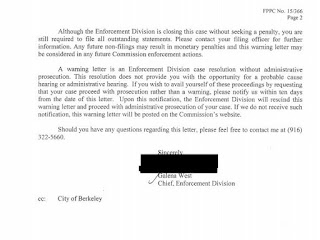 well doesn't this just say it all about this husam el-quack guy .. .."graduated with a degree in peace and conflict studies from UC Berkeley, and served a stint as a volunteer commissioner on the City of Berkeley's foreign policy body". ya know this is one of the many reasons why i'm not feeling the "bern". i'll be damn if i'm going to have my taxes raise so that anti-semitic assholes like this guy can go to left wing indoctrination centers like berkeley for free. screw both husam and berni! don't need berni sanders for president of the US any more then we need assholes like george galloway as mayor of one of the most prestigious cities in the world. i'm not a fan of the right but i refuse to give radical leftist any more political power then they have already.

One of the so-called "Irvine 11" Muslim Student Union members who disrupted the Oren speech at UCI in 2010 was later admitted to the Harvard Law School. He came back to UCI a couple of years later and boasted that the Dean of the school only noticed his application because he listed it on the document. He actually credited his acceptance to being one of the Irvine 11. (I was present and heard him say it.)

How smelly of him!
He just stinks.
Husam El-Qoulaq... A little stink in the wind.
This little stinker thinks everyone's stupid like he doesn't know what he did or is doing...
What a pittyfull defense for a law student... gees. What kind of law students is Harvard laying for the futur? Stinky jurist? Childesh thikers with no sense of dignity to be so low life and ungratefull like trying to act like a smartass little brat. That's what you get when a lady like Mrs Livni tried to make peace with first class hatters like Husam El-Qoulaq. That's all he had to bring to the table... his smelly brain. Fewwieee! How smelly of him. He smells even up to here... and that's just his big mouth too! Just imagine his inside...
He just painted himself in the corner. With hypocryticall hate paint too.