A bad week for Church Divest

Its an even numbered year, and that can only mean, one, well, two things. The San Francisco Giants will win the World Series and the Mainline Protestant Churches will vote on divestment from Israel, the only democracy in the Middle East

The United Methodist Church has convened a two week conference in Portland, and from the posts on social media, there is much prayer and soul searching going on. 864 delegates are considering nearly a thousand resolutions on a wide variety of issues.

As in past years, the conference is filled with anti-Israel activists, pushing divestment from companies that do business in Israel.  This year, it appears, the organization is pushing back

From a Press release from the Institute on Religion & Democracy


“Activists who seek to enroll the church in demonizing Israel serve neither peace nor justice for anybody”
-UM Action Director John Lomperis
United Methodists have voted to encourage church boards and agencies to end their affiliation with an organization that promotes boycotts, divestment and sanctions (BDS) against Israel. Delegates from across the 12.1 million-member denomination adopted a proposal asking to conclude agency affiliation with the U.S. Campaign to End the Israeli Occupation on a vote of 478 to 319 (60 percent to 40 percent) during their quadrennial General Conference meeting in Portland, Oregon.
The United Methodist Church previously rejected divestment in 2008 and 2012 while the Presbyterian Church and the United Church of Christ have both adopted divestment policies .
And this week, the United Church of Christ is learning that their choices have consequences. 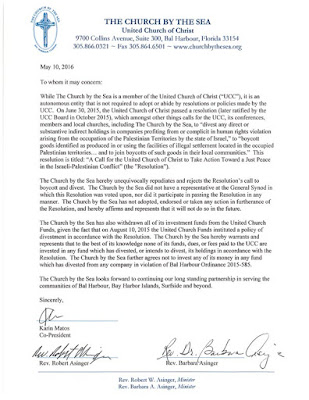 "The Church by the Sea hereby unequivocally repudiates and rejects the Resolutions call to boycott and divest". Additionally the Church “has also withdrawn all of its investment funds (almost $3M) from the United Church of Christ. Its a brave and principled stand to go against their denomination- a stand I hope is repeated by other churches in the coming months.

To read more about BDS in the pews

Will United Methodists Lead The Way In Rejecting Anti-Israel Divestment?