Tikvah: Students for Israel at UC Berkeley: The Tables Turned

The precious wildflowers of  UC Berkeley's Students for Justice in Palestine had originally planned a "die-in" for Israeli Apartheid Week, but postponed it because of the weather. 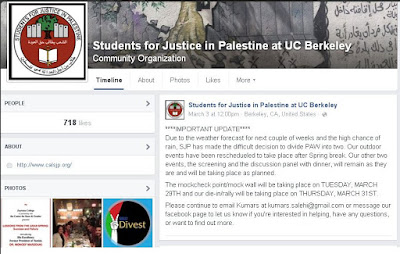 The pursuit of lofty goals such as justice are best left for sunshine and clear skies, after all. You might get dirty, otherwise.

On Thursday, March 31, a handful of  Berkeley SJP students, accompanied by a few community activists took to the streets of Berkeley to block traffic and shout vague platitudes at pedestrians and passing vehicles.

Students for Justice in Palestine is unsurprisingly at home in both the physical and the metaphorical gutter.

Tikvah, Students for Israel at UC Berkeley was ready for them.

that Bancroft and Telegraph intersection seems to be a favorite spot for these pro-terror useful idiot students to put on their dog n' pony shows.