Is SFSU President Les Wong Part of the problem?

Our community is dismayed and disappointed by the lack of civility and disrespect that we saw this week at San Francisco State University.  Eyewitnesses reported that police and administrators stood by and did nothing while bullies from the General Union of Palestinian students (GUPS) and other groups screamed obscenities in an attempt to disrupt an appearance of Jerusalem mayor Nir Barkat on campus  Afterward, the response of university to the disruption was predictably lukewarm.

Imagine if any other student group had been targeted. Would the response have been the same? Where are the safe spaces at SFSU for Jewish students?

San Francisco State University's General Union of Palestinian Students (GUPS) has been in the news before.  The president of the organization, Mohammad Hammad posted a photo on his tumblr account , declaring "I seriously can not get over how much I love this blade. It is the sharpest thing I own and cuts through everything like butter and just holding it makes me want to stab an Israeli soldier." 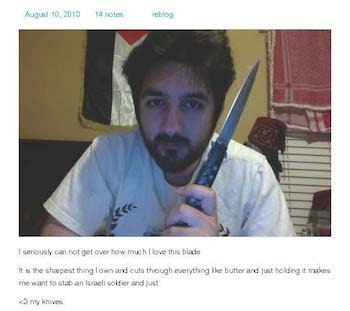 The San Francisco State University General Union of Palestinian students neither condemned Hammad's words, nor distanced themselves from them.

Why does SFSU continue to tolerate the intolerable?

It may be a top-down approach.

In a reception last year to celebrate the Arab and Muslim Ethnicities and Diaspora Minor at San Francisco State University, University President Les Wong makes his feelings about the General Union of Palestinian students very clear. Pres. Wong appears between 15:23 and 30:10 in the clip.

In the clip, Les Wong, the president of a tax-payer funded university in a major US city  expresses his admiration for a group that glorifies violence on campus, declaring:

"I want to offer my personal congratulations to the student leadership of GUPS. They have been an inspiration for me. And they have helped me when I have to tell other community groups to mind their own business. GUPS is the very purpose of this great university."

Les Wong actually visited the university called the "greenhouse for martyrs"  before he signed the MOU between SFSU and An-Najah University.  He spoke about his trip to Palestine, asking "Why aren't we signing more relationships with Arab Universities?", and declared  "as we repair the budget here, as we implement the strategic plan I have not lost sight of the commitment we've made to add faculty to support  students who want to learn more about the Arab world, and for me, Palestine in particular."

Wong adds: "We've tried to do some important things and that is to make sure our soul is still connected to the communities that are important to us, and thats this community. And when we do not participate, serve or respect that community we have in many ways lost our soul."

The students of the Jewish group Hillel would likely agree that SFSU  neither serves nor protects  their community, and that this university had indeed lost its soul. Increasingly it appears that a culture of intolerance is enabled from the top down at SFSU.

Great article. Cross-posted on fousesquawk and The College Fix picked up on the story.

I think Hamas would have a position available in thier "education" system for this Wong guy.

Mohammad Hammad should use his blade on himself. 72 virgins should be an enticement. Just Do It Moooohammed you terrorist sack of Garbage!

This is a significant story that needs to be promoted. There need to be consequences.