Alison Weir: One way or another, its the Jews fault

Alison Weir's March 30 talk at the Walnut Creek Library was apparently fraught with difficulty. And hyperbole. But mostly hyperbole. 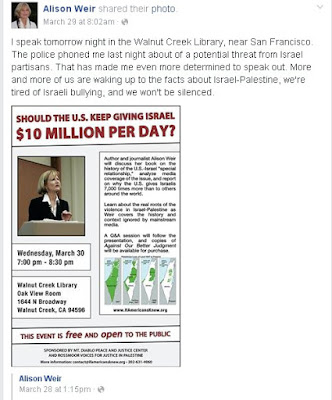 Instead of speaking to her usual cadre of true believers, she found her audience peppered with people who actually knew the truth.
It wasn't pretty for her.
Now, her and her minions can not  figure out who to blame.
Alison Weir, who sees StandWithUs in her tea leaves and in her cornflakes sent out a press release blaming the educational non-profit group, StandWithUs.
Can you say "Libel", Alison?

Are Alison Weir's difficulties  StandWithUs's fault or are they JVP's fault?

Does it even matter, as long as you can blame it on the Jews? 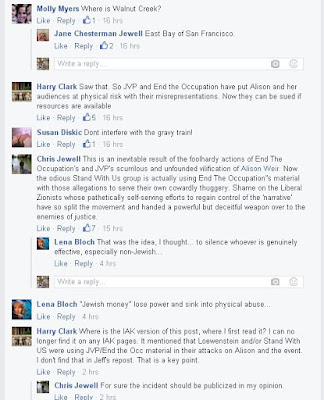 What we know, so far:
The so-called "threat" took the form of a group of local  high school students who gave out flyers and stood quietly with signs and flags.

Alison calls that a threat. The rest of us call it protected free speech. 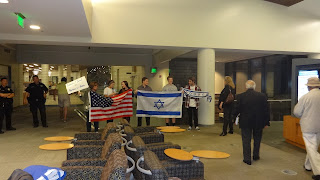 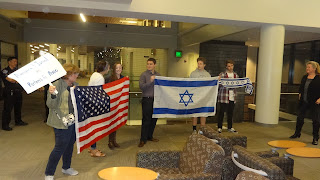 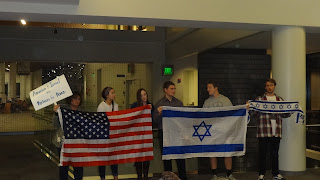 Although their flyer references JVP, they appeared too thoughtful, nuanced and well informed to be associated in any way with that extremist group. 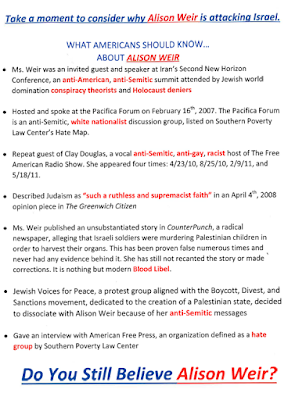 Thomas Paine reminded us that it is "an affront to truth to treat falsehood with complaisance." Bravo to the young people to stood up and challenged Alison Weir.

the police "phoned" her about a potential threat? really alison? she's not only a liar but also a drama queen. it's a wonder she didn't claim that her secret service detail warned her that they couldn't guarantee her safety if she spoke at the Walnut Creek library that night. she probably would have wished something had happened that way people would remember the whole thing beyond 48 hours.