Why checkpoints are still needed

Why checkpoints are still needed:

Earlier this week,  two tons of rocket-making material destined for Gaza were discovered at the Nitzana Border Crossing in southern Israel.  The fiberglass was likely intended for use in constructing long-range rockets.

Earlier this month, smuggled fiberglass was discovered at the Kerem Shalom crossing from Israel into Gaza, falsely labeled as containing school equipment.  Humanitarian aid continues to flow into Gaza in spite of the smuggling attempts. 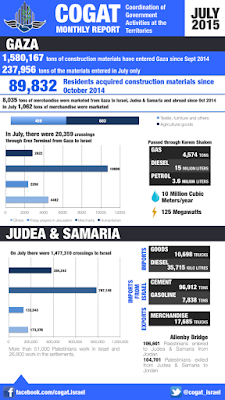 From the Times of Israel:
Since the beginning of the year the Tax Authority and Shin Bet have intercepted dozens of attempts to smuggle banned substances into Gaza that were suspected to be heading for the terror groups in Gaza.

Among the shipments seized were diving suits, polyurethane rocket propellant and carbon and sulfur rods for blast furnaces used in metal work...
From Israel National News:
The list of items that Israel prohibits from reaching Gaza is not very long. There are a grand total of 16 types of military materials, and 18 types of dual-use items.

The military items are mostly various types of chemicals, accelerants, fertilizers and carbon products needed for the manufacture of explosives. The idea that Gaza is "suffering" because they are deprived of these things is absurd. Let's hear the State Department explain why Gazans absolutely must have diethylenetriamine, thiethylenetramine, or  E-100-ethyleneamine.

The dual-use materials are items that can be disguised as being for civilian purposes, but which Israel knows from experience will be used for terrorist purposes. This list includes prepared concrete, hunting knives, and night vision goggles.
Posted by Dusty at 10:15 AM