Writing at Gatestone, Khaled Abu Toameh asks the question, "What  are Palestinians Doing with U.S. Money?", concluding  "One does not have to be an expert on Palestinian affairs to see that the billions of dollars have neither created democracy for the Palestinians nor boosted the Israeli-Palestinian peace process. "

During the past 20 years, the U.S. has invested $4.5 billion in promoting democracy among the Palestinians in the West Bank and Gaza Strip and boosting the Israeli-Palestinian peace process.

This is what Palestinian Prime Minister Rami Hamdallah revealed during a meeting in Ramallah this week with Congressman Kevin McCarthy, Majority Leader of the U.S. House of Representatives. Hamdallah said that the money was also invested in projects in various Palestinian sectors.

The $4.5 billion that Hamdallah talked about does not include the billions of dollars poured on the Palestinian Authority (PA) since its creation in 1994. Palestinian economic analysts estimate that the PA has received a total of $25 billion in financial aid from the U.S. and other countries during the past two decades.

One of the "projects" financed by US donations may very well be Abbas's new  Presidential Guest Place. Now serving the 11th year of his 4 year term, Abbas is building himself a facility fit for a king.


$13 million dollars is budgeted for the project, which includes 2 helipads 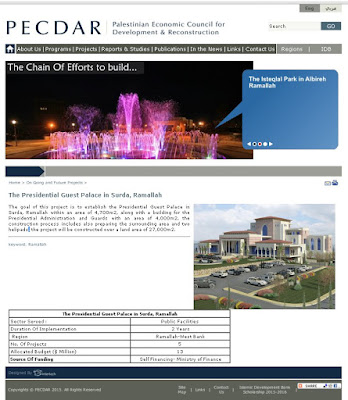 He should kill the architect. But I do like the apartheid wall he has surrounded himself with.

What horrible accomodations for the king of the Pal refugees.

And again, an anonymous blogger scoops the mainstream media, who are just picking up this story 4 days after it appeared here.