Hate speech should never go unchallenged and community members, organized by San Francisco Voice for Israel held a vigil in front of the First Congregational Church.  Organizers of the vigil issued guidelines regarding signage, reminding participants not to stoop to the hateful  level of Blumenthal's supporters.  Max Blumenthal's writing is so beyond the pale that it has earned the endorsement of the extremist group Stormfront and former KKK president David Duke.

Max derided the organizers  for their anti-racism stand, on Twitter. 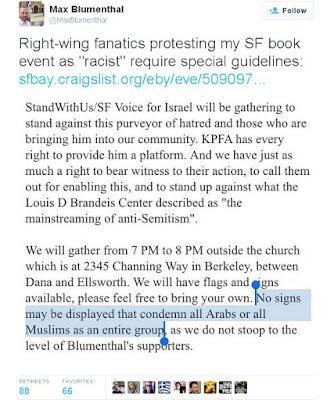 Mona Holland, a self described  "civil liberties extremist" and " hasbara debunker" responded  by saying  "I can't imagine "our side" having 2 issue "don't condemn all the Jews" guidelines.

Mona- have you ever seen the signage from San Francisco anti-Israel rallies?

Is this acceptable to you, Mona?

Any feelings about this one, Mona?
Is there ever a time when the messaging "Kill Jews" is acceptable, Mona?
The vigil in front of the First Congregational Church in Berkeley was largely uneventful. Flyers documenting Blumenthals' extremism were distributed.  Conversations were held with anyone who'd listen. 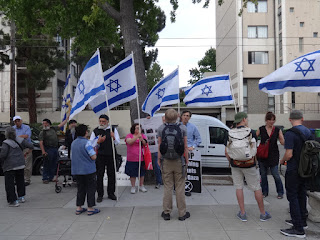 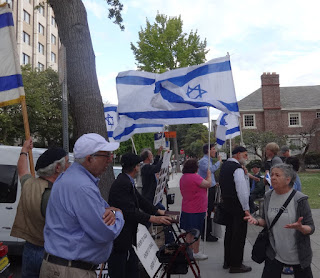 Why is David McCleary so upset? Did someone offer him a baloney sandwich?

Did anyone ask Max about his dad, Sidney and all the Libya emails to Hillary?

No, Gary. Although the protesters were offered free tickets to come inside and hear Max, no one was interested in subjecting themselves to his biased banter. With very few exceptions, he was largely preaching to the converted. There was one interesting encounter- one man walked out after 15 minutes- he had been expecting a journalistic assessment of the war in Gaza, and couldn't stomach Max's bias. He left , and was absolutely livid at KPFA for sponsoring the program.

I've known David and Kaitlin McCleary for years. Is he still claiming he is Jewish to score rhetorical points? He had a Jewish grandmother.
He would qualify under the Nuremberg laws, but still- his claims only come out of the closet when he's on his anti-Israel soapbox.

I too have known David and Kaitlin for years. Their maternal grandfather (Norman Frankel) and grandmother (Shila Frankel, nee Halperin) were lifelong members of a Jewish congregation. Norm and Shila spent their lives in a selfless pursuit of justice. They were well known civil rights activists and contributors who raised their children in the same tradition. Although they lived in an all-white, well-to-do suburb (Skokie, IL), for example, they enrolled their middle daughter, Ileen Frankel, in an all-black inner-city Chicago high school. Ileen passed the Frankel family's sense of justice to her children, David and Kaitlin. David and Kaitlin spent their weekends serving the poor, the handicapped, etc. (I suspect that David's activism is a continuation of that.) Ileen encouraged David and Kaitlin to be religious skeptics but, still, required both to attend a Jewish cultural school on weekends and holidays. Both took Hebrew lessons. Etc., etc., etc.

So anonymous ... do you really "know" David and Kaitlin?

To "Anonymous": Then I won't breathe a word about that social justice powerhouse, Hooters.
And for the record, promoting violence and terror is hardly "justice'

1. to "Anonymous" July 10 9:33 am You just can't leave a Hooters reference, and not follow through.
2. For more information about UC Berkeley graduate student David McCleary see: http://www.canarymission.org/individuals-mz/#/david-mccleary/