What has Hamas done to Minimize Civilian Casualties?

What has Hamas done to minimize civilian casualties? Absolutely nothing.

What has Israel done to minimize civilian casualties in Gaza?  Its gone to extraordinary lengths.

During Israel's  Pillar of Defense operation  there were over 1500 Israeli military strikes on terror targets in Gaza.  An additional one third  were cancelled when it was felt they could not be executed  safety without  causing  civilian deaths. While all deaths are tragic,  less were killed in a week of hostilities in Gaza than were killed in a day in Syria.  In fact, since 1948, less Arabs have been killed by Israel than were killed by Syria, in one year. 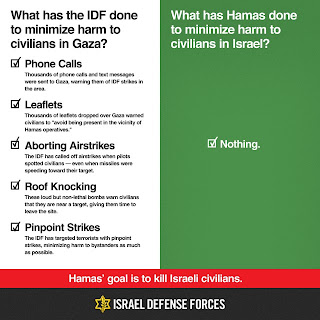 The IDF did everything it could to minimize civilian deaths , concentrating their activities on  weapons manufacturing and storage facilities, underground rocket launchers,  weapons smuggling tunnels and top-ranking Hamas and Islamic Jihad terrorists including