In every conflict, stories emerge of acts of heroism beyond the call of duty- of individuals whose personal commitment and dedication to their people stand out and inspire others.

Here's one of my newest personal heros.
Courtesy of IMRA via Maariv

The Nov 30, 2012 Maariv  features a photo of Hila, the 28 year old head of the testing division responsible for the testing and transfer of Iron Dome batteries  She is in her 9th month of pregnancy and is  due next week. 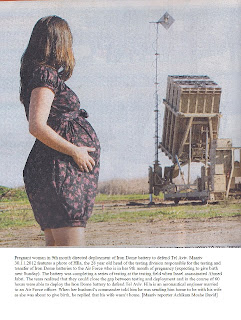 'The battery was completing a series of testing at the testing field when Israel assassinated Ahmed Jabri. The team realized that they could close the gap between testing and deployment and in the course of 60 hours were able to deploy the Iron Dome battery to defend Tel Aviv. Hila is an aeronautical engineer married to an Air Force officer. When her husband’s commander told him he was sending him home to be with his wife as she was about to give birth, he replied that his wife wasn’t home."

wow that's amazing. when it comes to hamas pregnant women are part of their "defense system" as well.