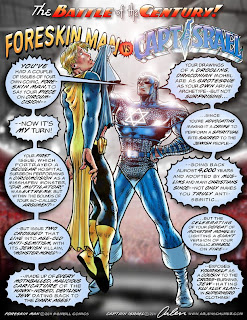 Thank you Arlen Schumer, creator of Captain Israel, who has triumphs over the anti-Semitic Foreskin man!
From the ADL

"The comic book portrays mohels -- those specially trained to perform the traditional Jewish circumcision ceremony -- as rapacious, bloodthirsty and bent on harming children. Some of the imagery calls to mind age-old anti-Semitic canards such as the blood libel, the accusation that Jews ritually murder Christian children. Another comic in the series also calls up more subtle anti-Jewish themes, such as when a character complains that the "pro-circumcision lobby" has "all of the well-connected doctors and lawyers."

"I met Mr. Schumer during my adventures at Comic-Con. In the audience of our panel discussion, he afterwards politely came up to me and proffered his eight-page, lavishly illustrated comic book before quietly going on his way.

The next day, having read the fine print inside Captain Israel, I googled Mr. Schumer’s name, and from there learned about MGMbill.org, the “intactivists” out there vigilantly fighting for the rights of infant boys to one day have their dicks look as long as possible, and, of course, the handsomely blonde Foreskin Man, who might as well have a swastika on his chest instead of that Bat-Butt thing he’s now sporting.

As I hope is already obvious, what fuels MGMbill.org is good old-fashioned antisemitism.

I was never a big fan of Captain America; I just can’t get excited about what amounts to Captain Geopolitical Entity. And my first thought upon seeing Captain Israel was that a comic book from Bizzaro World had accidentally fallen into ours.

Without in any way referencing to the whole Jewish-Palestinian issue, I would just like to say, on behalf of the six million Jews killed by the Nazis in WWII: Go, Captain Israel. Go.

And fuck you, Matthew Hess."


And the other good news:

A Superior Court judge ordered that the proposed measure, which had initially made it onto the November 8 city ballot, be removed entirely. Superior Court Judge Loretta Giorgi wrote that male circumcision is "a widely practiced medical procedure" and that medical services are left to the regulation of the state, not individual cities.
Posted by Dusty at 6:46 PM

YES!!! THIS IS AWESOME! I WANT SOME COPIES OF THIS!

Fpreskin man is beaten twice. Once by Captain Israel, and again, by a superior graphic artist

So, yes, it's disgusting, crass, anti-Semitic, hateful, and in addition unoriginal, but this is America, where anything is fit to be printed. We are not brown-shirted fascists who pass speech laws and create an unbearably litigious society that operates entirely on suspicion, emotion, impressions, and perception as reality. No, anti-Semites are entirely free to express themselves, up to and until the expression takes the form of violence.