For those of you on Twitter:
A press release by the grassroots human rights campaign, #tweet4shalit:

"American human rights activists are launching a new social media campaign on Twitter to raise awareness of the plight of captive Israeli soldier Gilad Shalit. The grassroots campaign, titled #Tweet4Shalit, hopes to rally thousands of tweeters on the week of Gilad Shalit’s 6th birthday in captivity.

“Gilad Shalit has been held in captivity for five years by the Hamas terrorist organization without a single visit from the International Committee of the Red Cross,” says Isaac Yerushalmi, creator of the campaign. “This contravenes international law. On his 5th consecutive birthday in Hamas captivity, Gilad is not able to tweet his wish for freedom, so we will.”

Gregg Roman, advisor at the Israeli Knesset says, “This is a great tool to remind everyone that Gilad is in the hands of the incredulous Hamas terrorist organization in Gaza, and I tip my hat off to the creator for taking this initiative.”

The campaign is viral in nature, and if successful could lead to the trending of Gilad Shalit’s name on the popular social networking website, making it visible to millions of Twitter users."
The campaign website can be accessed at http://www.tweet4shalit.com.

"The current Tweet4Shalit campaign is an example of grassroots activism by regular users. It uses well established techniques and is exactly two years behind the leading edge of modern online campaigning. Campaigns of this nature are far less newsworthy, and are also less likely to excite the technology enthusiasts who serve as catalysts for campaigns going viral. The secret to success in this type of a campaign is user friendliness and to eliminate all entry barriers. Tweet4Shalit.com does this very well. Follow a link to the site, and two clicks later, with no typing at all, you’ve left your mark. Success for such a campaign depends on grassroots activism and enthusiasm. It relies on many people putting in 10 seconds each, and on the nature of Twitter itself where the desired action also spreads the message to new potential participants."


Lets keep Gilad in peoples hearts and minds. Please tweet for Shalit. Thanks.

Free Gilad billboards have gone up throughout the coutry Have you spotted one? Send us a photo- we'll post it here. 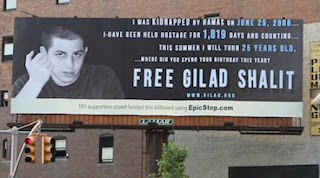 Free Gilad billboard in NYC
Posted by Dusty at 11:15 AM

i wish we were doing something around here for him.
in other news "New rebel govt." in libya refuses to extradite Lockerbie bomber.
. . well despite the millions of tax dollars America spent despite our own fiscal situation to bring that civil war to a much quicker conclusion on the rebel's terms you'd think in a gesture of gratitude they'd hand over a terrorist who never should have been released from jail in the first place. it just goes to show you nothing ever really changes in the arab world no matter who's running the show. may the arab spring go on for a 100 years. let em all kill each other off for all i care! here's the article if you want to read up on it:
http://www.jpost.com/MiddleEast/Article.aspx?id=235758