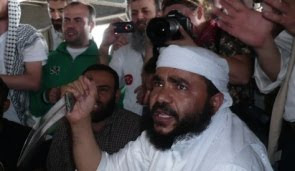 A "peace activist" holding a knife poses on board the Gaza flotilla   Israel Navy commandos boarded the ship on May 31, 2010. From Haaretz

Israeli military said in a statement: "Navy fighters took control of six ships that tried to violate the naval blockade (of the Gaza Strip) ...
During the takeover, the soldiers encountered serious physical violence by the protesters, who attacked them with live fire."

One of the commandos told reporters he descended by rope from a helicopter onto one of the six ships in the convoy and was immediately attacked by a group of people waiting for them.

"They beat us with metal sticks and knives," he said. "There was live fire at some point against us."

Footage taken from the ships shows Israeli soldiers being beaten with clubs, and being thrown off the deck of the ship. One IDF soldier was critically wounded. A Turkish crew member reportedly snatched a gun from an IDF soldier and then opened fire. Another soldier was stabbed in the stomach. All in the name of non-violent resistance.

And in the true spirit of their eternal victimhood, the pro-Hamas community is mobilizing with the theme "How dare the Jews fight back"

Expect demonstrations today in San Francisco.
The day of hate includes:
A demonstration at the empty Israeli Consulate in the morning, on a deserted street in the financial district, followed by a continuation of the rage at Powell and Market, in the afternoon.

In this footage, taken on board the Mavi Marmari on 30 May2010, IHH leader Bulent Yildirim clearly instructs his followers to throw the Israeli commandos overboard when they land on the ship. His speech was made in Turkish and repeated in Arabic by a translator.

Increasing evidence that the purpose of the ambush was to kidnap Israeli soldiers to deliver to Hamas:
Anyway, protests (and hopefully counter-protests) scheduled for :

DEBKA is reporting that the IDF had boarded and inspected 5 of the 6 cargo holds without incident. When they boarded the 6th ship "the activists aboard the Turkish vessel used ...firebombs, stun grenades, broken glass, slingshot, iron bars, axes and knives."

" Each commando who shinnied down the ladder from a helicopter was besieged and separated from the unit, then beaten, stabbed and assaulted with flying objects. Some were pushed down into the hold and stripped of their anti-flak vests first. The soldiers reported they barely escaped lynching or possibly being taken hostage."

DEBKA faults those in charge for "sending the men in armed only with paintballs and pistols with orders to shoot only if their lives were at risk. They did open fire, but only after half a dozen of their number were badly hurt."

Also: Israel erred by intercepting the fleet too far out at sea in international waters.

In case anyone asks you about International law:

San Remo Manual on International Law Applicable to Armed Conflicts at Sea:
67. Merchant vessels flying the flag of neutral States may not be attacked unless they:
(a) are believed on reasonable grounds to be carrying contraband or breaching a blockade, and after prior warning they intenti...onally and clearly refuse to stop, or intentionally and clearly resist visit, search or capture.
...
http://www.icrc.org/ihl.nsf/385ec082b509e76c41256739003e636d/7694fe2016f347e1c125641f002d49ceSee more
International Humanitarian Law - San Remo Manual 1994
www.icrc.org

As a neutral with no stake in either side (or rather, more towards Israel because I love the classical musicians it has produced) it seems ludicrous that ARMED COMMANDOS rappelling into a ship in international waters at night can expect anything less than a terrified and violent reaction. Anyone would believe they were under attack in such circumstances, and react accordingly.

I have no idea how anyone can defend these actions.

The passengers had plenty of warning - unless the Israeli ships and helicopters appeared out of thin air, like magic, in an instantaneous flash of light - poof! - there was no surprise element at all.

The Turkish gazees, on the other hand, got what they deserved. As did Raeid Salah - who is responsible for instigating several terror attacks and violence in the West Bank and in Israel.

The Israelis had paint ball rifles. They thought they were dealing with "peace activists"

"can expect anything less than a terrified and violent reaction."

The passengers were warned. They were lying in wait to ambush the Israelis. Do you think they just happened to be sleeping with iron bars and machetes?


"Anyone would believe they were under attack in such circumstances, and react accordingly."

Israel had every right to board these vessels. See the subsequent analysis of the San Remo manual on International Law applicable to conflict at Sea. And once again. This was an ambush by armed militants laying in wait.

So the whole world is wrong is it? Open your eyes and condemn this for what it was, a brutal attack on civilians bringing aid to people who need it badly. Its disgusting and to read this typical American pro-israeli BS is just indicative of the propaganda used and the brainwashing that goes on with respect to situation in Gaza. This is not about hamas, or bezbollah. This is about Israel threatening to use military force on humanitarian aid groups, then using un-necessary force. Even rational Israelis will condemn the action. They have majorly fcuked up and the world will hopefully open its eyes to what has gone on.

I hope the Irish ship doesn't receive the same 'welcome' the other ships did.

Wake up to reality and support humanity and realize who the real aggressors here are. ISRAEL.

The passengers on the Turkish vessel included Ialmic radicals from Turkey and Al Qaeda.

As for the Europeans... we all know about them. Cowards, chickenshits, and collaborators.

As for you? Well, you're probably a typical piece of garbage and a closet racist.

This was not a humanitarian aid group. This was a group trying to harm Israel by transporting weapons into Gaza. The Israelis said the ships could disembark at Ashdod, where after the Israelis made sure there were no weapons on board, the ships would be allowed to continue. But the ships refused to stop at Ashdod. Why? BECAUSE THEY WERE CARRYING WEAPONS.

So yeah, Israel really fucked up by PROTECTING ITSELF from militant Islamic radicals who want to see Israel wiped off the face of the Earth.

It's disgusting that Israel faces criticism for defending itself.