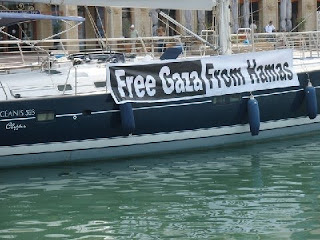 Many anarcho-zionists continually turn to the words of famed radical Saul Alinsky for inspiration. His 70's pamphlet "Rules for radicals" still functions as a "how to" manual for direct action, grass roots advocacy groups.

Organizers from Stand With Us, a non-profit Israel advocacy group are clearly well versed in Alinsky's ideology, fighting fire with fire, and doing it brilliantly.

Alinsky: "Ridicule is man's most potent weapon. It is almost impossible to counteract ridicule. Also it infuriates the opposition, which then reacts to your advantage."

Stand With Us is organizing a flotilla of boats sailing from Asdod tomorrow to met the "Ship of Fools" from the Free Gaza Movement on its alleged humanitarian mission to "free Gaza."

"We will be there with our own flotilla of boats and signs that expose the real human rights problems. Gaza must be freed from the chains of the Hamas dictatorship and its Iranian sponsors," said Roman Baron, who helped organize the counter-demonstration.

"Ending Israel's restrictions on Gaza could be easy. Hamas just has to end its war, accept Israel's existence as a Jewish state and agree to past PLO-Israel peace agreements. Our flotilla will educate the public and hopefully pave the way for a better future for Israelis and Palestinians," Baron said.

In the event that the Free Gaza Pro-hamas Flotilla makes it through to Gaza, independent bloggers have been putting together a Gaza Travel Guidebook for them. This guide of where to stay, eat and shop while touring Hamasistan should be a helpful resource to the latest round of Gaza tourists.
Posted by Dusty at 9:30 AM

Email ThisBlogThis!Share to TwitterShare to FacebookShare to Pinterest
Labels: Free gaza Movement, Saul Alinsky Rules for Radicals, Stand With US