Greta Berlin’s press releases for the "Free Gaza movement" could be classified as works of fiction. My comments in italics.

On May 24, 2010, the Freedom Flotilla sets sail for Gaza determined to, once again, challenge Israel’s blockade of 1.5 million Palestinians trapped in an open-air prison. 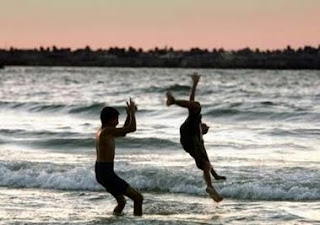 An open air prison with 25 miles of white Mediterranean beaches


These passengers include members of Parliament from around the world, U.N., human rights and trade union activists, as well as journalists who will document the largest coordinated effort to directly confront Israel’s illegal blockade of Gaza and take in basic supplies.

Greta, could you mean basic supplies including wheat and flour, meat, chicken, fish and legumes in addition to agricultural produce, animal feed, hygiene products and medicals supplies?
These already came through the crossings from Israel. along with games, basketballs and balloons, trampolines and swimming pools, generators, air-conditioning accessories, clothing, shoes and hats, chairs, mattresses and styrofoam cups; and raw materials for paper production.


In the past three months, Israel has limited fuel to run the power station.

Much of Gaza is often in darkness.

Uh huh. Generally beginning at dusk. Ending at dawn. Like the rest of the world.

There are just enough trucks coming in to barely prevent total starvation,

According to Unicef, Palestinians have the second lowest rate of stunting and malnutrition in the Arab Middle east. Its no wonder , with 439 truckloads (10,983 tons) of goods transferred to the Gaza Strip just last week

Egypt, complicit with the Israeli-US policy of blockading Palestinians, is building an underground steel wall to prevent people in Gaza from bringing in vitally needed supplies through tunnels. 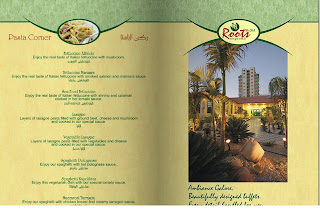 I can’t help but wonder if the free Gaza group will stay at the Commodore Gaza again, and eat at Roots, described by the Lonely planet guide as where "important people dine on steak au poivre and chicken cordon bleu" . Their own website describes "Sophisticated, exquisite, diverse and approachable Cuisine" The 14 page menu sure looks good.
Posted by Dusty at 3:29 PM

re: Roots. What comes to my mind is "Just like the Warsaw ghetto"

How come there is no 'Freedom Convoy' for the Sudan?

"In the past three months, Israel has limited fuel to run the power station."

I am sure that the writer of the above sentence is fully aware, but probably just forgot, that most of [Arab Occupied] Gaza's power doesn't come from [Arab Occupied] Gaza's power plant, but rather in direct electric cables from Israel (and a little from Egypt)... the writer of the above sentence probably just forgot to mention that.... It could happen to anybody.

In a bid to stir awareness of anti-Israeli slants in foreign media coverage of Gaza, the Government Press Office sent an e-mail on Wednesday to members of the Foreign Press Association in Israel containing a guide to a luxurious restaurant in the Strip and a recently opened Olympic-sized pool.

The e-mail was based on a recent dispatch by journalist and commentator Tom Gross, in which he highlighted what he described as “the manipulative agenda of the BBC and other foreign media agencies.”

In the dispatch, sent on Tuesday, Gross added that much of the foreign media coverage was “deliberately misleading global audiences and systematically creating the false impression that people are somehow starving in Gaza, and that it is all Israel’s fault.”

Gross sent the dispatch ahead of the imminent arrival of a flotilla of boats carrying pro-Palestinian activists attempting to reach Gaza to deliver what they say is humanitarian aid to the Gazan people.

“In anticipation of foreign correspondents traveling to Gaza to cover reports of alleged humanitarian difficulties in the Hamas-run territory, and as part of efforts to facilitate the work of journalists in the region, the Government Press Office is pleased to bring to your attention the attached menu and information for the Roots Club and Restaurant in Gaza,” the GPO missive read.

“We have been told the beef stroganoff and cream of spinach soup are highly recommended. You may wish to enquire of a possible discount upon presentation of a valid press card. There is also the possibility of an enjoyable evening on the Greens Terrace Garden Cafe, which serves ‘eclectic food and fresh cocktails,’” it continued.

“Correspondents may also wish to enjoy a swim at the new Olympic size swimming pool as reported in the Palestinian media to have been opened last week,” the e-mail said.

Speaking to The Jerusalem Post on Wednesday, Seaman said he not surprised to receive several outraged responses from foreign journalists.

“Those who act as spokespeople for Palestinian propaganda were furious with self-righteous indignation and were angry,” Seaman said. “This was to be expected.”

“There is much hypocrisy in the coverage by international media of Gaza, and unfortunately, to some extent, the Israeli media plays a part in it. We are receiving political, slanted coverage. This message could help them wake up and do a better job,” he added

This is really strange that all this attention seekers wannabes don't find time to pay North Korea a visit, and while they're at it, how about going to Chechniya, and helping its inhabitants against the Russians. And Turkey, occupier of Kurdistan, the home of the oppressed Kurdish people. How about Sudan/Darfoor? or maybe Iran?
This is not an aid mission, but rather a provocation masterminded by pathetic needy loosers, who desperately seek some attention from world media. Spice that with some self righteousness, and add a little antisemitism, and voila, you have a disgusting pie you can serve at all times.
Peace activists... give me a break! I have just read that After Cyprus refused to allow this so called freedom flotilla to abuse their good will, they decided they'll use Turkish-Cyprus ports for their mission, even though this is an occupied territory, with Turkish sovereignty not recognized by any one.